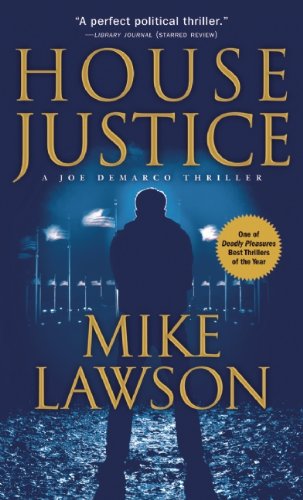 An American defense contractor goes to Iran to sell missile technology, and the CIA knows all about it, thanks to a spy in Tehran. But the story is leaked to an ambitious journalist and the spy is executed. DeMarco and the CIA aren't the only ones looking for the source of the leak.

In his thrillers starring Joe DeMarco, Mike Lawson has made a name for himself as one of the most entertaining and insightful writers focusing on the dirty games played in our nation's capital. In House Justice, an American defense contractor goes to Iran to sell missile technology, and the CIA knows all about it thanks to a spy in Tehran. But the story is leaked to an ambitious journalist and the spy is burned, brutally tortured, and executed.

The director of the CIA isn't about to let the callous sacrifice of his valuable spy go unpunished. DeMarco's boss, Speaker of the House John Fitzpatrick Mahoney has his own reasons to get to the bottom of the leak: he once had a fling with the journalist, and now that she's in jail for refusing to reveal her source, she is threatening to tell all unless he helps get her out.

DeMarco and the CIA aren't the only ones looking for the source of the leak. Someone else wants to avenge the spy's death, and is tailing DeMarco hoping he'll lead him to his prey. House Justice is classic Mike Lawson-- fascinating characters, inside-the-beltway intrigue, and a gripping plot packed with surprises.

"Mike Lawson has certainly made a claim as the best political thriller writer working today. That would certainly be my contention. ... I'm especially impressed with the consistently high quality of this series. The stories are not only scarily believable, but exciting and very well told. I'm a big fan." --George Easter, Deadly Pleasures

"Some two dozen characters, major and minor, are introduced, and Lawson makes all of them memorable . . . The dialogue is sharp, cynical, and often funny. . . . A superb example of the post-cold war espionage novel." --Booklist (starred review)

"A lightning-paced Washington conspiracy thriller filled with spies and traitors and a hero you'll cheer for. Mike Lawson knows what he's talking about, and he tells it irresistibly." --Joseph Finder, New York Times bestselling author of Vanished, Power Play, and Paranoia

"The quorum is assembled and the votes tallied--Mike Lawson tips the scales in House Justice with one of the finest thrillers I've had the pleasure of reading this year."--Craig Johnson, author of The Cold Dish and Junkyard Dogs

"Good news for thriller readers: Joe DeMarco has returned, and he's as entertaining as ever. House Justice marks the fifth time that author Mike Lawson has featured DeMarco, a law school grad whose practice consists of doing dirty jobs for the speaker of the U.S. House of Representatives. ... This tale rolls through a wham-bam plot packed with violence and intrigue. DeMarco must deal with Russian-American mobsters, corrupt industrialists, greedy and conniving lawyers, hired killers and a mysterious assassin with whom he keeps crossing paths, all set to a backdrop of governmental bureaucratic backstabbing." --Harry Levins, >St. Louis Post-Dispatch

"House Justice is one of those mile-a-minute thrillers that simply doesn't let up." --Mysterious Reviews

GOR004482191
9780802145352
0802145353
House Justice by Mike Lawson
Mike Lawson
Joe DeMarco Thrillers (Paperback)
Used - Very Good
Hardback
Grove Press / Atlantic Monthly Press
2011-07-14
577
N/A
Book picture is for illustrative purposes only, actual binding, cover or edition may vary.
This is a used book - there is no escaping the fact it has been read by someone else and it will show signs of wear and previous use. Overall we expect it to be in very good condition, but if you are not entirely satisfied please get in touch with us
Trustpilot