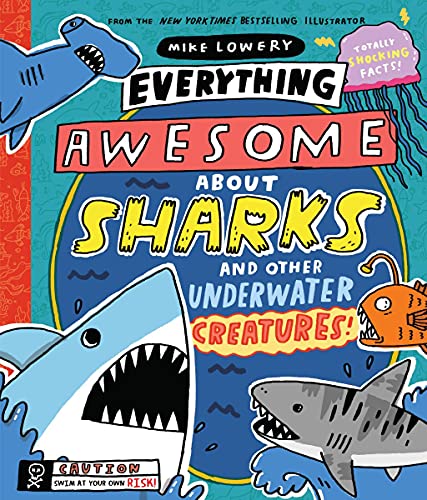 Everything Awesome About Sharks and Other Underwater Creatures! by Mike Lowery

Find out all this and more, in this comprehensive, hilarious underwater deep dive from Mike Lowery! Featuring fun facts, jokes, comics, maps, and more.

Everything Awesome About Sharks and Other Underwater Creatures! by Mike Lowery

Discover the must-have book for shark fanatics, a madcap field guide full of facts and humour, and learn everything you ever wanted to know about underwater creatures! Did you know that sharks can be as small as a banana, or bigger than a bus? Or that whale sharks have more than 3,000 teeth? Did you know that giant squids have eyes the size of dinner plates? Or that clownfish are protected by snot armour? Find out all this and more, in this comprehensive, hilarious underwater deep dive from Mike Lowery! Featuring: fun facts jokes comics maps

Praise for Everything Awesome About Sharks and Other Underwater Creatures:

In the wake of Everything Awesome About Dinosaurs and Other Prehistoric Beasts! (2019), Lowery spins out likewise frothy arrays of facts and observations about sharks, whales, giant squid, and smaller but no less extreme (or at least extremely interesting) sea life... An immersive dunk into a vast subject-and on course for shorter attention spans. -- Kirkus Reviews

Praise for Everything Awesome About Dinosaurs and Other Prehistoric Beasts:

* Lowery sandwiches a populous parade of very simply drawn dinos between a history of prehistory and a roundup of diverse topics, from what paleontologists do to sets of dinosaur jokes and A Few Kinda Weird (and Unlikely!) Dino Extinction Theories... though true dinosaurs hold the spotlight, flying and marine reptiles, early mammals, and other fabulous early fauna take such frequent star turns that along with infobites galore, readers will come away with a fairly sound understanding of just how dinosaurs fit into the whole history of life on this planet... A manic but solid series kickoff. -- Kirkus Reviews, starred review

* Barnett and Lowery bring the funny to the serious art of espionage in a perfect interplay of text and illustration... Barnett interweaves tidbits of global history fit for trivia lovers, while Lowery's comic-style images play a key role in the humor... Told with a sense of nostalgia for 1980s history and pop culture, the silliness and originality of this book will hook young readers. -- School Library Journal, starred review

An enjoyable romp that will leave readers salivating for the sequel. -- Kirkus Reviews

[Barnett's] riotous series debut as an adult recalling a 1980s childhood caper... goofy, two-color pictures by Lowery (the Doodle Adventure series) ramp up the silliness of this adventure... which should snare even the most hesitant readers. -- Publishers Weekly

Mike Lowery is an illustrator whose work appears in everything from greeting cards to children's books. He is the creator of the Doodle Adventures series and the Everything Awesome About series, and the illustrator of the Gingerbread Man on the Loose and Mac B., Kid Spy series, and more. Find out more at mikelowery.com and on Instagram, @mikelowerystudio. He lives with his wife and two children in Atlanta, Georgia.
NGR9781338359732
9781338359732
1338359738
Everything Awesome About Sharks and Other Underwater Creatures! by Mike Lowery
Mike Lowery
New
Hardback
Scholastic US
2020-10-01
128
N/A
Book picture is for illustrative purposes only, actual binding, cover or edition may vary.
This is a new book - be the first to read this copy. With untouched pages and a perfect binding, your brand new copy is ready to be opened for the first time
Trustpilot