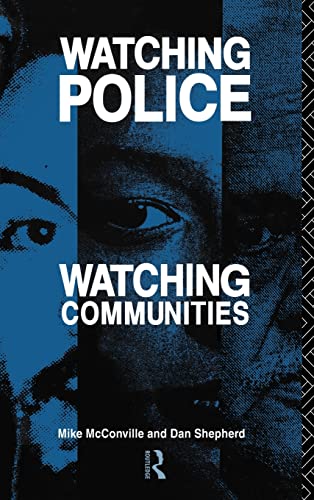 In Stock
$13.99
+10% GST
Examines the the Neighbourhood Watch scheme and other community policing initiatives, revealing that most schemes are now dormant or dead and arguing that this is largely due to a lack of commitment to community policing by police forces.
Good
Only 1 left

From the early 80s community policing has been held up as a new commitment to the ideals of service and the rejection of coercive policing styles. The idea was to encourage a partnership between the public and police in which community needs would be met by officers on local beats.
Today, Government ministers and senior police officers depict Neighbourhood Watch, the centrepiece of the scheme, as a great success. However, Watching Police, Watching Communities reveals that most schemes are dormant or dead. The authors trace the causes of scheme failure to the lack of commitment to community policing by police forces. Most importantly, they find a police rank-and-file culture which celebrates aggression, machismo and the assertion of authority especially against areas occupied by ethnic minorities and other disadvantaged groups.

"The McConville and Shepherd analysis is based on a rich body of data collected between 1988 and 1990 in a number of neighborhoods located in the jurisdictions of three police forces in England and Wales. Within each research site, indepth interviews were conducted with community beat officers, relief officers (who have more traditional enforcement roles), and supervisors. In addition, the authors systematically surveyed residents in NW [Neighborhood Watch] and non-NW neighborhoods located within each jurisdiction....Space limitations prevent my paying full justice to the richness of this superb book, which I think should be mandatory reading for anyone even slightly interested in crime prevention."
-"American Journal of Sociology

1. Introduction 2. Public Attitudes to the Police 3. Fear of Crime 4. The Reality of Neighbourhood Watch 5. The Nature and Functions of 'Community' Policing 6. Police Occupational Culture 7. Institutional Dynamics of Police Culture 8. Discussion and Overview

GOR010089063
Watching Police, Watching Communities by Mike McConville
Mike McConville
Used - Good
Hardback
Taylor & Francis Ltd
1992-05-28
284
0415073642
9780415073646
N/A
Book picture is for illustrative purposes only, actual binding, cover or edition may vary.
This is a used book - there is no escaping the fact it has been read by someone else and it will show signs of wear and previous use. Overall we expect it to be in very good condition, but if you are not entirely satisfied please get in touch with us.