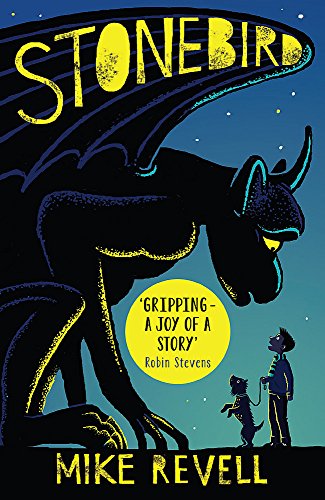 In Stock
$13.69
inc. GST
A beautifully moving story about the power of stories, STONEBIRD is an extraordinary novel that will capture the imagination of children and adults alike. Perfect for fans of David Almond, Abi Elphinestone and Katherine Rundell.
Very Good
Only 2 left

'Gripping - a joy of a story' Robin Stevens

Shortlisted for the Shrewsbury Book Award and the Warwickshire Book Award

When ten-year-old Liam moves house to be closer to his dementia-suffering grandma, he's thrown into an unfamiliar place with a family that seems to be falling apart. Liam doesn't remember what his grandma was like before she became ill. He only knows the witch-like old woman who snaps and snarls and eats her birthday cards. He wants to fix it, but he can't.

Walking his dog one day, Liam discovers an old stone gargoyle in a rundown church, and his life changes in impossible ways. The gargoyle is alive. It moves unseen in the night, acting out Liam's stories. And stories can be dangerous things...

Seeking revenge against the bullies at his new school, Liam tells a story about the gargoyle attacking them. When one of them ends up in hospital, a regretful Liam vows never to go near the gargoyle again.

But his grandma's illness is getting worse, his mum isn't coping, and his sister is skipping school... What if the gargoyle is the only thing that can save Liam's family?

I loved this and read it in one sitting ... It's a really special debut, full of heart, hope and the power of storytelling * Bookseller *
A heartbreakingly good debut. Fresh and beautifully written, this is something very special * Robin Stevens, author of Murder Most Unladylike *
It is a beautiful, delicate story about a boy who is just trying to do the right thing for everyone, and it will provoke much thought and discussion. -- Sue * The Bookbag *
This book is a perfect introduction to reading for a primary audience, especially for young boys who will be able to identify with Liam and learn both from him and with him. -- Anna James * We Love This Book *
This novel is nothing short of magical and had me in tears - several times. -- Catherines Johnson * Wordpress *
This is a very important novel for young people to read -- Jodie Brooks * School Zone *

Mike Revell has always wanted to write for children. He studied Creative Writing at the University of Essex, followed by a postgraduate journalism course at Harlow College. Mike also has a passion for American Football, and has covered it for the Mirror and NFL UK. He lives next to a castle in North Wales with his girlfriend and his dog, Cookie.

GOR007019365
Stonebird by Mike Revell
Mike Revell
Used - Very Good
Paperback
Hachette Children's Group
2015-08-06
304
1848668635
9781848668638
N/A
Book picture is for illustrative purposes only, actual binding, cover or edition may vary.
This is a used book - there is no escaping the fact it has been read by someone else and it will show signs of wear and previous use. Overall we expect it to be in very good condition, but if you are not entirely satisfied please get in touch with us.