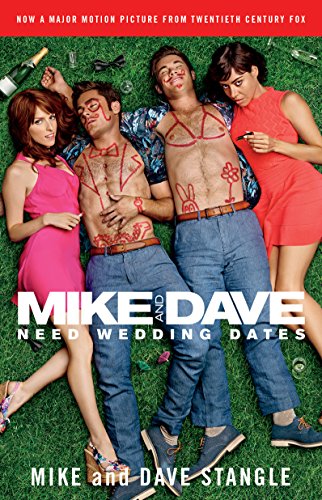 Mike and Dave Need Wedding Dates: And a Thousand Cocktails by Mike Stangle

SOON TO BE A MAJOR MOTION PICTURE FROM 20TH CENTURY FOX
My brother and I are looking for wedding dates for our cousin's wedding.
We've been told by the bride that bringing dates is "mandatory" so we "won't harass all of my friends all night" and "stay under control." Rather than ask some fringe women in our lives to go and face the inevitable `does this mean he wants to take it to the next level?!' questions, we'd rather bring complete strangers and just figure it out...
We're both in our 20s, single, dashingly tall, Anglo-Saxon, respectfully athletic, love to party, completely house trained...love our mother, have seen Love Actually several times...raw, emotional, sensitive, but still bad boys....You should be attractive or our aunts will judge you, but not TOO attractive or one of our uncles might grope you.
Dave and Mike Stangle thought nothing of it when they boozily decided to turn to the "activity partners" section of Craigslist to solicit dates to their cousin's wedding. The hilarious, out-of-this-world ad that they came up with-featuring a picture of the two brothers as centaurs-immediately went viral, eventually landing these Wayfarers-wearing, moped-riding, completely reckless but ultimately loveable bros in the annals of the "Internet famous."
With the incredible comedic chemistry of Vince Vaughn and Owen Wilson in Wedding Crashers and the uncensored honesty of Tucker Max, Mike and Dave insist there's nothing wrong with just seeing where life takes you.

Dave and Mike Stangle are brothers who grew up outside Albany, New York. They now cause mayhem in New York City.

GOR007762166
Mike and Dave Need Wedding Dates: And a Thousand Cocktails by Mike Stangle
Mike Stangle
Used - Very Good
Paperback
Simon & Schuster
2016-07-28
256
1501157094
9781501157097
N/A
Book picture is for illustrative purposes only, actual binding, cover or edition may vary.
This is a used book - there is no escaping the fact it has been read by someone else and it will show signs of wear and previous use. Overall we expect it to be in very good condition, but if you are not entirely satisfied please get in touch with us.