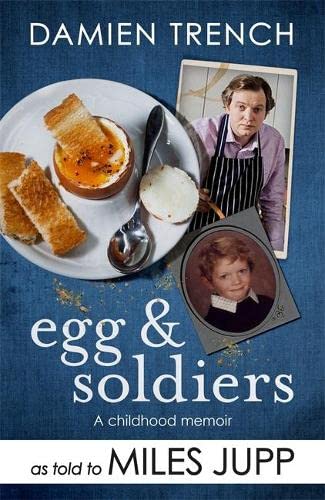 Egg and Soldiers
by Miles Jupp

Used Price
$37.99
inc. GST
Free Shipping in Australia
A charming childhood memoir (with postcards from the present) by cookery writer Damien Trench, star of Miles Jupp's Radio 4 series, In and Out of the Kitchen.
Reviews:
Trustpilot
Very Good

Egg and Soldiers: A Childhood Memoir (with postcards from the present) by Damien Trench by Miles Jupp

'A gloriously enjoyable read from start to finish' - Daily Express

'Here's a book to savour' - Mail on Sunday

Miles Jupp (News Quiz presenter, star of Rev, I'm Sorry I Haven't a Clue and The Thick Of It) delves into the mind of his comedy creation Damien Trench - urbane food writer and protagonist of BBC Radio 4's acclaimed sitcom In and Out of the Kitchen.

'Are you Damien Trench?' said the lady operating the stall.
'I might be,' I said to the lady.
'You are though, aren't you?' she asked.
'Well...yes,' I agreed. And that was that.
She seized me by both hands, pulled me towards her, and launched into a passionate monologue that covered a selection of dessert recipes that I had once offered up in print, her difficult relationship with soft cheeses and her husband's irritable skin. So intense was her manner that it was extremely difficult to tell if she was scolding or praising me. All I knew was that she was staring so intently at me that I became worried that parts of me would dry up and just drop off like smoked chipotles. Also, her eyes were so extremely wide open that I began to worry that it might be dangerous to let so much light into your head. As soon as she stopped speaking, I thanked her for being willing to share, broke free from her grasp, panic-bought three punnets of raspberries on the way out and then sprinted back to the Uno as fast as fast can be.

'Whether you're already a fan of Jupp's bumbling bon viveur, or are stumbling across him for the first time, here's a book to savour.' Mail on Sunday

[Damien Trench] is a glorious comic creation . . . Jupp has transferred him from radio and TV on to the page in a highly effective manner. A gloriously enjoyable read from start to finish. * Daily Express *
Whether you're already a fan of Jupp's bumbling bon viveur, or are stumbling across him for the first time, here's a book to savour. * Mail on Sunday *

MILES JUPP is an actor, comedian and writer. He played Nigel in the BAFTA winning sitcom REV, and John Duggan in Armando Iannucci's THE THICK OF IT, and has made multiple appearances on HAVE I GOT NEWS FOR YOU, MOCK THE WEEK and WOULD I LIE TO YOU? As well as writing and starring in IN AND OUT OF THE KITCHEN, he has chaired THE NEWS QUIZ since 2015.

DAMIEN TRENCH is an award winning food writer whose life was chronicled in BBC Radio 4's IN AND OUT OF THE KITCHEN. He lives in London with his partner Anthony.

GOR008698765
Egg and Soldiers: A Childhood Memoir (with postcards from the present) by Damien Trench by Miles Jupp
Miles Jupp
Used - Very Good
Hardback
Headline Publishing Group
2017-09-07
320
1472239911
9781472239914
N/A
Book picture is for illustrative purposes only, actual binding, cover or edition may vary.
This is a used book - there is no escaping the fact it has been read by someone else and it will show signs of wear and previous use. Overall we expect it to be in very good condition, but if you are not entirely satisfied please get in touch with us.