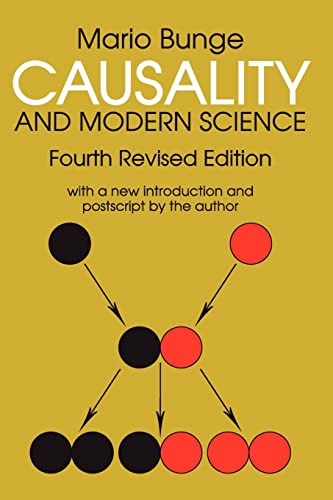 The causal problem has become topical once again. This book analyzes the function of the causal principle in science, touching on such subjects as scientific law, scientific explanation, and scientific prediction. In so doing, it offers an education to layman and specialist alike on the history of a concept and its opponents.

The causal problem has become topical once again. While we are no longer causalists or believers in the universal truth of the causal principle we continue to think of causes and effects, as well as of causal and noncausal relations among them. Instead of becoming indeterminists we have enlarged determinism to include noncausal categories. And we are still in the process of characterizing our basic concepts and principles concerning causes and effects with the help of exact tools. This is because we want to explain, not just describe, the ways of things. The causal principle is not the only means of understanding the world but it is one of them.

The demand for a fourth edition of this distinguished book on the subject of causality is clear evidence that this principle continues to be an important and popular area of philosophic enquiry. Non-technical and clearly written, this book focuses on the ontological problem of causality, with specific emphasis on the place of the causal principle in modern science. Mario Bunge first defines the terminology employed and describes various formulations of the causal principle. He then examines the two primary critiques of causality, the empiricist and the romantic, as a prelude to the detailed explanation of the actual assertions of causal determinism.

Bunge analyzes the function of the causal principle in science, touching on such subjects as scientific law, scientific explanation, and scientific prediction. In so doing, he offers an education to layman and specialist alike on the history of a concept and its opponents. Professor William A. Wallace, author of Causality and Scientific Explanation said of an earlier edition of this work: "I regard it as a truly seminal work in this field."

Mario Bunge holds a named chair in the Philosophy Department at McGill University in Montreal. His works include Treatise on Basic Philosophy in eight volumes, Philosophy of Physics, Scientific Materialism, Social Science under Debate, and Philosophy of Science, the revised edition of which is published by Transaction.
NLS9781412808248
9781412808248
1412808243
Causality and Modern Science by Milton Hindus
Milton Hindus
New
Paperback
Taylor & Francis Inc
2008-11-30
452
N/A
Book picture is for illustrative purposes only, actual binding, cover or edition may vary.
This is a new book - be the first to read this copy. With untouched pages and a perfect binding, your brand new copy is ready to be opened for the first time
Trustpilot