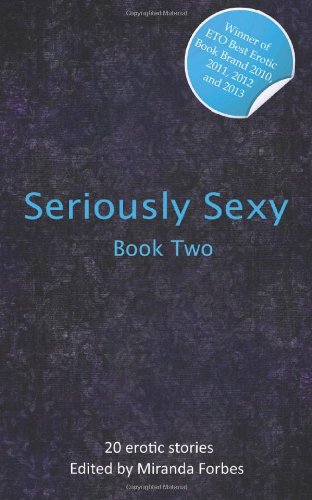 The short stories in this collection are written by the best authors in the business and the mixed themes are sure to satisfy.

Scrapbook Pages by Sommer Marsden: Pictures of an abandon wooden shack with its door hanging at an angle, a field of sea oats, and a flight of rickety white weathered steps, might just been seen as being artistic. But these are Jill's favourites because of the intimate memories that it holds for her. Some pictures are worth more than a thousand words!

Spying on Audrey by Eva Hore: He's always been hot for delicious Audrey. As her neighbour, he loves to watch her secretly through her window, yearning to touch her. One night she leaves the drapes open, and that is all the invitation he needs to go over, but what treats will he find if he peeks inside?

Watch on the Danube by Donna George Storey: Pru has always considered herself to be an enlightened traveller. But husband Adam can't quite see the magic that enchants her, until one fateful afternoon when they come across the Baroness and her lover. Inspired by fantasy and the Great Danube River, Pru steers their evening into uncharted waters, while teaching Adam why it's better to just go with the flow!

A Punishment to Some by Anais Nohant: D.H. is furious when he realizes that his hot little minx isn't complying with his demands. He takes her home intent on making her learn her lesson! But punishments are gifts to some!

Backstage by Roger Frank Selby: Busty, bossy and beautiful Laura Lacey is an actress who is used to getting what she wants. And with a body like hers, she usually does! But when a silly mishap backstage puts her in a vulnerable position, only one man can help. She might need more than her acting skills to get her out of this sexy predicament!

Spring Break Girls, Hot Sun, Sand, Surf and S-E-X by Lynn Lake: From a storage locker room below decks with Emma and Brad in Cancun Mexico, to Shonelle, a wet t-shirt contest winner in Daytona Beach, all the way to South Padre Island Texas with Breanne, a blonde beauty who gets to know her long time girlfriend better than she expected to, this travel agent knows the hottest places to party during Spring Break!

Happy Birthday Ben by Roxanne Sinclair: Helen makes her way through the park, on her way to see her gorgeous boyfriend Ben. With a basket of treats in hand she strolls to the shed where he waits patiently for her arrival. But Helen has more than one sweet way of saying Happy Birthday Ben!

My Cousins 21st. by Eva Hore: After a wild night of drinking and celebrating, she snuggles up with Peter on her cousin's living room floor. Sharing a blanket with him in a room full of passed out people makes this little hottie feel mighty frisky! How far will she go to fulfil her naughty desires? Or will she get caught in the act?

High Tea in Suburbia by Mark Farley: Time has been good to Kim, a beautiful fifty something who is prim, proper and very strict! He has always loved older women and their ability to dominate! With her wooden ruler in hand and him scurrying about on his knees, he is more than ready to serve and submit!

Ecstasy Heights by Louise Fuller: Through the pounding music and pulsating lights of the club, she follows the heat and the scent of him. They burst forth together out into the night, the air is damp; a storm is on its way. Together on the tiny balcony, these two lovers have their own secret way of enjoying the rain!

Thanks for the Memory by Roxanne Sinclair: Lather up baby! Carla is the first one to the shower cubicle this morning, or so she thinks! While foaming up with her mango scented soap, she realizes pleasantly that she isn't alone after all! Although she may need another shower if this handsome foreigner has his way!

Phone Jack by Landon Dixon: What an exhilarating rush! Poor Vicky is stuck on the phone with work again, but husband Jim has a tasty surprise in store to make her work day more enjoyable! Fortunately, turnabout is fair play when Vicky shows up at Jim's work with a surprise of her own!

Arlene by N. Vasco: Arlene's husband Mark has taken care of everything, hotel reservations, dinner at a 5 star restaurant, even a sexy outfit for Arlene's yoga sculpted body to wear, but when Marks long lost buddy Phil joins them for dinner, Arlene learns the true meaning of double your pleasure, double your fun!

The Boss by Ruby Latour: John's reputation as a ladies' man has always made Jade a little weary. But after a few glasses of wine at a rather boring company party, Jade can't seem to take her eyes off of him! Perhaps dirty talking John might have the chance after all to show Jade why all the women love him!

Company Picnic by Chloe Devlin: Greta doesn't feel like she belongs at this company picnic, seeing how she is just a temp and all. But Marcus and Dominic, the two top salesmen, make her feel more then welcome! Will Greta satisfy their ravenous appetite or will they have Greta for dessert?

The Journey by Izzy French: "Third door down," he'd said. Ever since she was a child, Eva has thought train journeys to be exciting and romantic! Looking like a modern day heroine, she makes her way to the sleeper carriage. As she enters the narrow room, she sees him, standing at the window. Will this handsome stranger be the man to unlock Eva's fantasy?

1001 Arabian Slut Slaves by Chloe Devlin: Trained by her masters own hand, Lilly knows how to please a man. She has earned her way to the top of his harem, discovering her own sexual nature in the process. Now, as a privileged favourite, she is allowed the opportunity to entertain Sultan Ahmed's special guest, Joshua, but only if she pleases the Sultan!

For the Love of Arrogance by Shermain Williams: Emily can't stand Anthony's arrogance. Flirtatious, charming and completely egotistical, he is the proverbial dick swinger with the male members of the staff. But after a few drinks with his sexy girlfriend Nicole, Emily gets an unexpected invitation to see just what this stud is all about behind closed doors!

Self Control Lesson by Anna Ford: Nothing like the smell of leather on warm skin! Anna has only ever done what she is instructed to by her master. But over the next few days her self control will be put to the test! Will he break her will or will Anna teach him who's really in charge?

Show Home by Landon Dixon: House hunting isn't exactly how he wants to spend his Saturday afternoon with girlfriend Jen but the steamy view from a second story window into the neighbour's back yard gives him a whole new appreciation for the term "neighbourhood watch"!

GOR010753790
Seriously Sexy 2 by Miranda Forbes
Miranda Forbes
Seriously Sexy
Used - Like New
Paperback
Headline Publishing Group
2008-06-09
156
1906125864
9781906125868
N/A
Book picture is for illustrative purposes only, actual binding, cover or edition may vary.
The book has been read, but looks new. The book cover has no visible wear, and the dust jacket is included if applicable. No missing or damaged pages, no tears, possible very minimal creasing, no underlining or highlighting of text, and no writing in the margins.