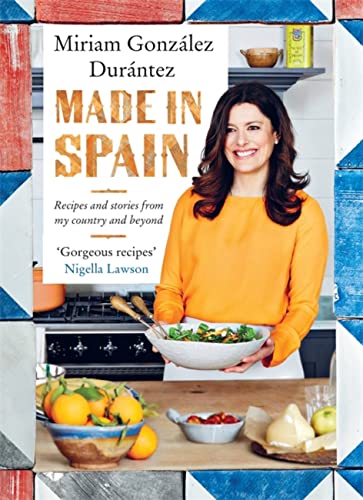 Made In Spain
by Miriam Gonzalez Durantez

Made In Spain Summary

Made In Spain: Recipes and stories from my country and beyond by Miriam Gonzalez Durantez

'Gorgeous recipes for a great cause.' Nigella Lawson

'If you buy one cookbook this year: get this one.' YOU Magazine

'One book I've loved this year is Made in Spain by Miriam Gonzalez Durantez. It's not just about the food and the recipes, you get an idea of what life is like, you get to visit a country and you get to be inspired, if it's somebody as intelligent and funny as Miriam.' Cerys Matthews, BBC RADIO 4 THE FOOD PROGRAMME

'Food is at the centre of everything we do in Spain. As we eat breakfast we think about what we will have for lunch, and during lunch we discuss what we will serve for dinner.'

In Spanish families, when you have eaten a really good home-made meal, people stay at the table long after the meal has ended, chatting and putting the world to rights. Made in Spain is full of dishes that will encourage you to do just that. With over 120 delicious recipes, which stick to the key principle of Spanish cooking - respect the ingredient - Miriam Gonzalez Durantez brings a taste of Spain to the family kitchen.

As an immigrant to the UK and from a family of food lovers, Miriam was determined to share her love of her native cuisine with her sons. The recipes in this book are adapted from the cookery blog she started with them (www.mumandsons.com), and provide a uniquely personal glimpse into a modern family kitchen, which will inspire home cooks everywhere to adopt a more Spanish approach to cooking and eating.

Miriam has written Made in Spain to help finance her involvement in her campaign to inspire girls.

Made In Spain Reviews

Gorgeous recipes for a great cause * Nigella Lawson *
If you buy one cookbook this year: get this one -- Louise Carpenter * YOU MAGAZINE *

Miriam is the author of the Mumandsons blog, www.mumandsons.com. She is also a partner at a city law firm where she runs the International Trade practice as well as a non-Exec Director for UBS in Spain, and the Honorary President of Canning House. She was previously the Middle East Adviser of the External Relations Commissioner in the European Union, having started her career as a Trade Negotiator at the World Trade Organisation. Miriam is the former Champion of the Inspiring Women Campaign that brings female role models to girls at state schools. She is currently setting up a new international campaign - Inspiring Girls - to connect female role models and girls worldwide to raise aspirations, encourage girls to aim high and fight gender stereotypes.

GOR007758718
Made In Spain: Recipes and stories from my country and beyond by Miriam Gonzalez Durantez
Miriam Gonzalez Durantez
Used - Very Good
Hardback
Hodder & Stoughton
2016-07-28
288
147363900X
9781473639003
N/A
Book picture is for illustrative purposes only, actual binding, cover or edition may vary.
This is a used book - there is no escaping the fact it has been read by someone else and it will show signs of wear and previous use. Overall we expect it to be in very good condition, but if you are not entirely satisfied please get in touch with us.