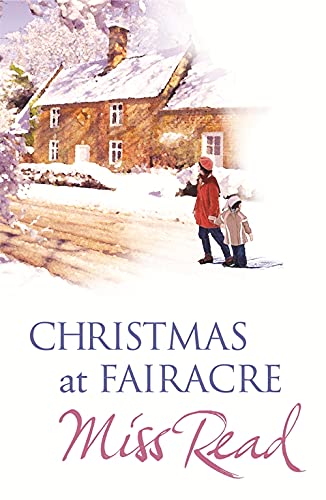 Christmas At Fairacre
by Miss Read

Out of Stock
$17.49
inc. GST
A delightful Christmas collection of Fairacre tales from the ever-popular Miss Read.
Like New
Only 0 left

A delightful Christmas collection of Fairacre tales from the ever-popular Miss Read.

The people of Fairacre celebrate Christmas in a traditional style which has hardly changed over the generations. Children eagerly hang up their stockings, families go to church together and everyone enjoys Christmas cake and other treats of the festive season.

From an unexpected visitor on Christmas Eve in 'The Christmas Mouse' to an unwanted change of plan in 'No Holly For Miss Quinn', Miss Read recounts some of the most memorable Christmas events where often, despite best-laid plans, things do not always go as expected.

For heart-warming reading there is no writer to rival Miss Read, and this charming collection of Christmas tales is packed with unforgettable characters, enchanting stories and festive cheer.

Unforgettable characters... drama, romance and humour--EXPRESS
An affectionate, humorous and gently charming chronicle... sometimes funny, sometimes touching, always appealing--NEW YORK TIMES
Miss Read so understands and loves the country and can write to tenderly and humorously about the minutiae of village life without distortion or sentimentality--TLS

Miss Read, or in real life Dora Saint, was a teacher by profession who started writing after the second world war, beginning with light essays written for Punch and other journals. She then wrote on educational and country matters and worked as a scriptwriter for the BBC. Miss Read was married to a schoolmaster for sixty-four years until his death in 2004, and they had one daughter. Miss Read was awarded an MBE in the 1998 New Year Honours list for her services to literature, She was the author of many immensely popular books, including two autobiographical works, but it was her novels of English rural life for which she was best known. The first of these Village School, was published in 1955, and Miss Read continued to write about the fictional villages of Fairacre and Thrush Green for many years. She lived near Newbury in Berkshire until her death in 2012.

GOR010228638
Christmas At Fairacre: The Christmas Mouse, Christmas At Fairacre School, No Holly For Miss Quinn by Miss Read
Miss Read
Christmas Fiction
Used - Like New
Paperback
Orion Publishing Co
2006-10-18
272
0752877976
9780752877976
N/A
Book picture is for illustrative purposes only, actual binding, cover or edition may vary.
The book has been read, but looks new. The book cover has no visible wear, and the dust jacket is included if applicable. No missing or damaged pages, no tears, possible very minimal creasing, no underlining or highlighting of text, and no writing in the margins.