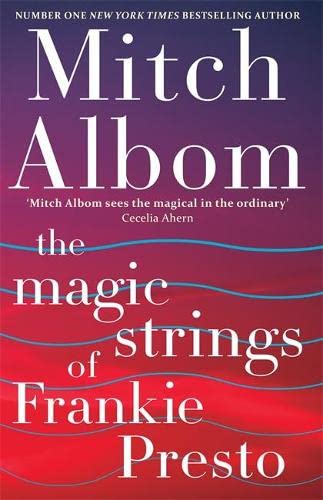 The Magic Strings of Frankie Presto
by Mitch Albom

In Stock
$20.49
inc. GST
From number one New York Times bestseller, Mitch Albom, author of The Five People You Meet in Heaven and Tuesdays With Morrie, comes his latest inspirational, moving and heart-warming novel.
Like New Very Good Good
Only 1 left

The Magic Strings of Frankie Presto by Mitch Albom

At nine years old, Frankie Presto is sent to America in the bottom of a boat. His only possession is an old guitar and six precious strings.

But Frankie's talent is unique, and his amazing journey weaves him through the musical landscape of the twentieth century, from classical to jazz to rock and roll, with his stunning talent affecting numerous stars along the way, including Hank Williams, Elvis Presley, Carole King and even KISS.

Frankie becomes a pop star himself. He makes records. He is adored. But his gift is also his burden, as he realises, through his music, he can actually affect people's futures -- with one string turning blue whenever a life is altered.

At the height of his popularity, Frankie Presto vanishes. His legend grows. Only decades later does he reappear, to change one last life . . .

Mitch Albom sees the magical in the ordinary * Cecelia Ahern *
You will be shaken, stirred and, finally, a little teary. Gorgeous * Star on The First Phone Call From Heaven *
This page-turner challenges beliefs about relationships, loss and life after death * Sun on The First Phone Call From Heaven *
The Magic Strings of Frankie Presto will make you laugh, cry and touch you in various ways . . . this moving story is one to enjoy and savour * Worcester News *

GOR010551989
The Magic Strings of Frankie Presto by Mitch Albom
Mitch Albom
Used - Like New
Hardback
Little, Brown Book Group
2015-11-10
512
1847442277
9781847442277
N/A
Book picture is for illustrative purposes only, actual binding, cover or edition may vary.
This is a used book - there is no escaping the fact it has been read by someone else and it will show signs of wear and previous use. Overall we expect it to be in very good condition, but if you are not entirely satisfied please get in touch with us.