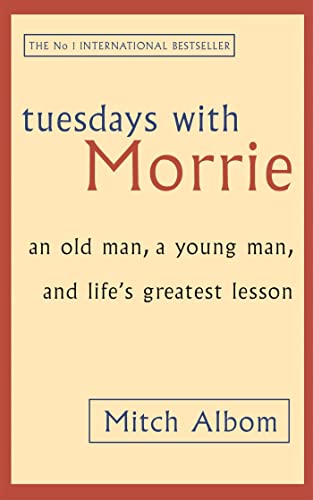 Tuesdays With Morrie
by Mitch Albom

In Stock
$15.49
inc. GST
* Subtitled 'An old man, a young man, and life's greatest lesson', this is a true story of a man's rediscovery of his mentor - a book about second chances.
Like New Very Good Good Well Read
36 in stock

Tuesdays With Morrie: An old man, a young man, and life's greatest lesson by Mitch Albom

Maybe it was a grandparent, or a teacher or a colleague. Someone older, patient and wise, who understood you when you were young and searching, and gave you sound advice to help you make your way through it. For Mitch Albom, that person was Morrie Schwartz, his college professor from nearly twenty years ago.

Maybe, like Mitch, you lost track of this mentor as you made your way, and the insights faded. Wouldn't you like to see that person again, ask the bigger questions that still haunt you? Mitch Albom had that second chance. He rediscovered Morrie in the last months of the older man's life. Knowing he was dying of ALS - or motor neurone disease - MItch visited Morrie in his study every Tuesday, just as they used to back in college. Their rekindled relationship turned into one final 'class': lessons in how to live.

TUESDAYS WITH MORRIE is a magical chronicle of their time together, through which Mitch shares Morrie's lasting gift with the world.

A beautifully written book of great clarity and wisdom that lovingly captures the simplicity beyond life's complexities * M Scott Peck, author of THE ROAD LESS TRAVELLED. *
This is a true story that shines and leaves you forever warmed by its afterglow * Amy Tan, author of THE JOY LUCK CLUB *
A moving tribute to embracing life. * GLASGOW HERALD *
Albom is naturally a colourful writer... Morrie Schwartz stands out as inspiring. * IRELAND SUNDAY TRIBUNE *

GOR001226284
Tuesdays With Morrie: An old man, a young man, and life's greatest lesson by Mitch Albom
Mitch Albom
Used - Very Good
Paperback
Little, Brown Book Group
2003-07-24
224
0751529818
9780751529814
N/A
Book picture is for illustrative purposes only, actual binding, cover or edition may vary.
This is a used book - there is no escaping the fact it has been read by someone else and it will show signs of wear and previous use. Overall we expect it to be in very good condition, but if you are not entirely satisfied please get in touch with us.