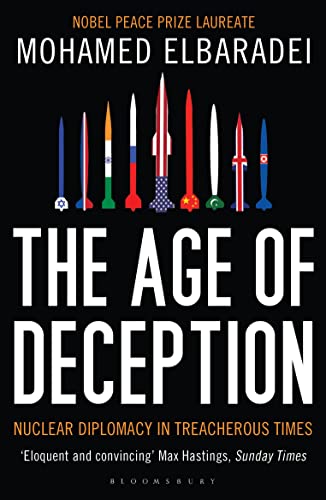 The Age of Deception
by Mohamed ElBaradei

Used Price
$13.69
inc. GST
Free Shipping in Australia
Mohamed ElBaradei was deeply involved in the UN in the run-up to the Iraq War. Now, for the first time, he tells the story of what happened behind the scenes, and assesses the threat that nuclear weapons pose to our future.
Very Good

The Age of Deception Summary

The Age of Deception: Nuclear Diplomacy in Treacherous Times by Mohamed ElBaradei

When he was unanimously elected Director General of the International Atomic Energy Agency in 1997, few could have forecast the dramatic role Mohamed ElBaradei would play in every key nuclear confrontation of the next twelve years. Dealing with the nuclear aspirations of Libya and North Korea, standing up to the Bush administration on Iraq, and managing the West's turbulent stand-off with Iran, ElBaradei emerged as the one independent voice, unique in maintaining credibility in the Arabic and Western worlds. In this account, ElBaradei take us to the heart of the nuclear debate. Inspector, consultant and diplomat, he moves from a Baghdad restaurant where Iraqi officials bleakly predict war, to behind-the-scenes exchanges with Condoleezza Rice and Colin Powell. The Age of Deception is an unparalleled account of the struggle to find solutions to the insecurities of the nuclear age by a man who knows the true risks better than anyone.

The Age of Deception Reviews

The long section on the Iraq weapons inspections has the compelling feel of a high-level political drama as ElBaradei recount, with mounting frustration and horror, the constant manipulation of information that he can see leading up to a bloody conflict * The Times *
Elegantly written and the period it covers was extraordinary * Daily Telegraph *
Eloquent and convincing * Sunday Times *
ElBaradei, a Nobel laureate, writes as a concerned former insider, looking back on his term as Director-General of the International Atomic Energy Agency ... Imposing * Literary Review *

Mohamed ElBaradei served as Director General of the International Atomic Energy Agency from 1997 to 2009. Heralded for their work in limiting nuclear proliferation, ElBaradei and the IAEA were jointly awarded the Nobel Peace Prize in 2005. ElBaradei, who has a doctorate in International Law from the New York University School of Law, has been widely touted as a potential Egyptian presidential candidate in 2011. He lives in Cairo.

GOR005752140
The Age of Deception: Nuclear Diplomacy in Treacherous Times by Mohamed ElBaradei
Mohamed ElBaradei
Used - Very Good
Paperback
Bloomsbury Publishing PLC
2012-06-07
352
1408822245
9781408822241
N/A
Book picture is for illustrative purposes only, actual binding, cover or edition may vary.
This is a used book - there is no escaping the fact it has been read by someone else and it will show signs of wear and previous use. Overall we expect it to be in very good condition, but if you are not entirely satisfied please get in touch with us.