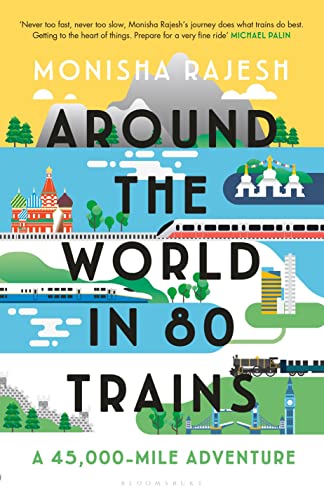 Around the World in 80 Trains
by Monisha Rajesh

Around the World in 80 Trains Summary

Around the World in 80 Trains: A 45,000-Mile Adventure by Monisha Rajesh

WINNER OF THE NATIONAL GEOGRAPHIC TRAVELLER AWARD FOR BEST TRAVEL BOOK SHORTLISTED FOR THE STANFORD DOLMAN TRAVEL BOOK OF THE YEAR AWARD 'Monisha Rajesh has chosen one of the best ways of seeing the world. Never too fast, never too slow, her journey does what trains do best. Getting to the heart of things. Prepare for a very fine ride' Michael Palin When Monisha Rajesh announced plans to circumnavigate the globe in eighty train journeys, she was met with wide-eyed disbelief. But it wasn't long before she was carefully plotting a route that would cover 45,000 miles - almost twice the circumference of the earth - coasting along the world's most remarkable railways; from the cloud-skimming heights of Tibet's Qinghai railway to silk-sheeted splendour on the Venice Simplon-Orient-Express. Packing up her rucksack - and her fiance, Jem - Monisha embarks on an unforgettable adventure that will take her from London's St Pancras station to the vast expanses of Russia and Mongolia, North Korea, Canada, Kazakhstan and beyond. The ensuing journey is one of constant movement and mayhem, as the pair strike up friendships and swap stories with the hilarious, irksome and ultimately endearing travellers they meet on board, all while taking in some of the earth's most breathtaking views. From the author of Around India in 80 Trains comes another witty and irreverent look at the world and a celebration of the glory of train travel. Rajesh offers a wonderfully vivid account of life, history and culture in a book that will make you laugh out loud - and reflect on what it means to be a global citizen - as you whirl around the world in its pages.

Around the World in 80 Trains Reviews

What makes the book is [Rajesh's] wit, astute observations and willingness to try everything ... She arrived at St Pancras, on time, tired and triumphant. Her riveting account of the odyssey leaves us feeling the same * The Times *
Delightful ... memorable ... Rajesh is not only blessed with an elegant style, but is witty and ever ready for a bit of self-deprecation * Spectator *
As Monisha Rajesh triumphantly demonstrates in Around the World in 80 Trains, there's life yet in both the trip and the telling * Daily Telegraph *
Monisha Rajesh has chosen one of the best ways of seeing the world. Never too fast, never too slow, her journey does what trains do best. Getting to the heart of things. Prepare for a very fine ride -- Michael Palin
Rajesh [is] a rare rising star of the genre ... She has a simple and easy style, she sees everything and listens to everyone, she's funny when she wants to be and serious when she needs to be, and she keeps the whole thing barrelling along like a wonderful dinner party conversation -- Marcus Berkmann * Daily Mail *
A relentlessly curious and wonderfully descriptive writer ... [Rajesh] offers us a never-ending series of Theroux-esque, quirky anecdotes ... Remarkably engaging ... If you fancy learning about global travel in the relative slow lane, try boarding this carriage and staring out the window - here you can view the world through Rajesh's eyes, as she takes us on a lazy, time-bending meander in search of authenticity and humanity * Geographical *
An epic journey ... When I say that I felt almost physically tired at the end of this book, I mean it as a compliment, a testament to its vivid evocations -- Country Life
A triumph: a rollicking account, full of memorable encounters and laced with wit ... Rajesh is an elegant stylist with a winning line in self-depreciation; hers is a delightful book * The Week *
This is travel-writing entirely at home in the 21st century, penned by a travel writer entirely comfortable in her own skin, and unashamedly enthused by the thrill of setting out to meet new people and to see new places * Asian Review of Books *
A wonderfully wry and witty debut. Crackles and sparks with life like an exploding box of Diwali fireworks * Praise for Around India in 80 Trains, William Dalrymple *
Rajesh's quick-fire writing is unflinchingly frank, with details packed in as tightly as passengers on Mumbai's commuter trains. A lively read * Praise for Around India in 80 Trains, Lonely Planet Magazine *
A great big lovely shambling train ride of a book, offering wonderful views, hilarious interludes, all sorts of dodgy characters and some very peculiar smells, all for the one ticket * Praise for Around India in 80 Trains, Giles Coren, The Times *

Monisha Rajesh is a British journalist whose writing has appeared in Time magazine, the New York Times, the Guardian and the Sunday Telegraph, in which she wrote a column about her journey around the world. Her first book Around India in 80 Trains (2012) was named one of the Independent's best books on India. Born in Norfolk and mostly raised in Yorkshire - with a brief stint in Madras - she currently lives in London with her husband and daughter. www.80trains.com @monisha_rajesh

GOR009910236
Around the World in 80 Trains: A 45,000-Mile Adventure by Monisha Rajesh
Monisha Rajesh
Used - Like New
Hardback
Bloomsbury Publishing PLC
2019-01-24
336
1408869756
9781408869758
N/A
Book picture is for illustrative purposes only, actual binding, cover or edition may vary.
The book has been read, but looks new. The book cover has no visible wear, and the dust jacket is included if applicable. No missing or damaged pages, no tears, possible very minimal creasing, no underlining or highlighting of text, and no writing in the margins.