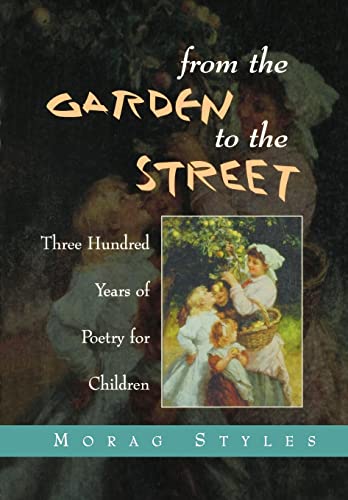 From the Garden to the Street
by Morag Styles

Used Price
$28.99
inc. GST
Free Shipping in Australia
Traces the changes and developments in children's poetry from the late 17th century to the late 20th century. The text makes reference to different genres within poetry, changing constructions of childhood, the role of women in developing children's poetry and the influence of anthologists.
Reviews:
Trustpilot
Very Good

From the Garden to the Street Summary

From the Garden to the Street: Three Hundred Years of Poetry for Children by Morag Styles

From John Bunyan's 'country rhimes' to rude chants about Manchester United, from Ted Hughes to Edward Lear, and from William Blake to the Taylor sisters, Morag Styles covers three hundred years of poetry with infectious enthusiasm and a keen critical eye. In this scholarly and fascinating book, she provides an informative account of the history of poetry written for children in Britain and America in the last three centuries. She analyses the major poets, genres and developments over this period, and traces the continuities between the past and the present. Styles asks fundamental questions which have often been left unanswered: What do we mean by children's poetry? Why did such a seemingly small number of women write poetry for children until recently? The author subscribes to the widest possible definition of poetry, and so the reader will find in this book hymns, songs, playground rhymes, raps and verse - whether trivial or profound. From the Garden to the Street will provoke, inform and entertain academics of children's literature, those who teach it in the classroom, and all of us who still take pleasure in the poetry of childhood.

Customer Reviews - From the Garden to the Street

From the Garden to the Street Reviews

"A necessary addition to the scant existing scholarship on the history of poetry for children .Her enthusiasm for poetry across the centuries is contagious, and both the poets and poems she examines will provide other serious scholars of children's poetry a starting place for continued study of their own." Children's Literature Association Quarterly, Winter 2000

Morag Styles is Reader in Children's Literature and Education at the University of Cambridge, UK, where she is Fellow of Homerton College.

Good, godly books - religious literature; an urge to delight - nursery verse and lullabies; the capacity to amuse - humorous poems; invisible women - obscure female poets; from the best poets? - the role of anthologists; marigold garden - poetry of the countryside; songs and stories - music, magic and adventure; the street and other landmarks - contemporary and other urban poetry for children.

GOR003019445
From the Garden to the Street: Three Hundred Years of Poetry for Children by Morag Styles
Morag Styles
Cassell Education
Used - Very Good
Paperback
Bloomsbury Publishing PLC
1997-06-01
384
0304332224
9780304332229
N/A
Book picture is for illustrative purposes only, actual binding, cover or edition may vary.
This is a used book - there is no escaping the fact it has been read by someone else and it will show signs of wear and previous use. Overall we expect it to be in very good condition, but if you are not entirely satisfied please get in touch with us.