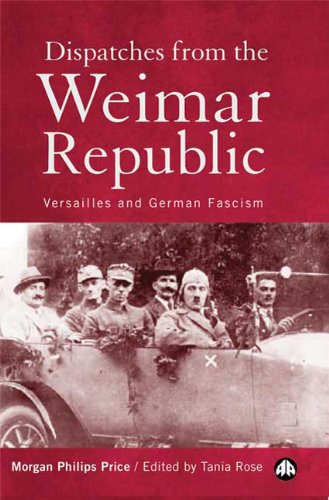 Dispatches From the Weimar Republic
by Morgan Philips Price

In Stock
$21.49
inc. GST
A remarkable insight into Weimar Germany through the collected writings of one of the best journalists of the period.
Very Good
Only 1 left

Dispatches From the Weimar Republic Summary

Dispatches From the Weimar Republic: Versailles and German Fascism by Morgan Philips Price

`This is a superb text which is relevant for anyone who has an interest in the turbulent post war years of Germany and the Weimar period ... It is very accessible ad easy to read, bolstered by the clarity of its language and organisation.' History Teaching Review

The period immediately following the First World War was one of great turbulence in Germany. The widespread dislocation throughout the country left morale crushed, and the economy crippled by Allied demands for reparations. Russia was in the hands of the Bolsheviks and Germany seemed on the brink of falling to working-class revolutionaries. Writing between 1919 and 1923 as special correspondent for the Manchester Guardian, Price was one of the very few British journalists in Weimar Germany during these important years. His unique position as an outsider allowed him to record what he saw with an objective eye, and his sympathy with the Bolsheviks gave him an understanding of the deeper implications behind the unfolding of events. These remarkable writings, reprinted for the first time in 80 years, cover the key events in postwar Germany. Price witnesses the establishment of the Weimar Republic, the emergence of Hitler and the Nazi Party, the inflammatory violence in the south of the country, which threatened civil war, and the signing of the Versailles Treaty.

Morgan Philips Price's writings for the Manchester Guardian won him wide acclaim. He also reported for the Daily Herald, and the New York Herald Tribune, and was the author of several books. His Dispatches from the Revolution: Russia 1916-18 was published by Pluto Press in 1997. Tania Rose is Price's daughter. She has had a long and varied career, working as an air warfare specialist for the Ministry of Defence in World War II, in the Commission on Racial Equality, and as a screenwriter. Now retired she devotes her time to historical research.

GOR002644998
Dispatches From the Weimar Republic: Versailles and German Fascism by Morgan Philips Price
Morgan Philips Price
Used - Very Good
Hardback
Pluto Press
1998-12-25
240
0745314252
9780745314259
N/A
Book picture is for illustrative purposes only, actual binding, cover or edition may vary.
This is a used book - there is no escaping the fact it has been read by someone else and it will show signs of wear and previous use. Overall we expect it to be in very good condition, but if you are not entirely satisfied please get in touch with us.