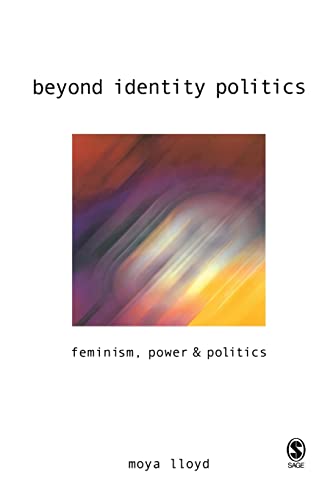 Beyond Identity Politics
by Moya Lloyd

In Stock
$16.49
+10% GST
A Feminist Politics of Difference engages with key contemporary issues such as difference, identity and subjectivity, and their relation to power and politics.
Good
Only 1 left

Beyond Identity Politics: Feminism, Power and Politics by Moya Lloyd

Recent debates in contemporary feminist theory have been dominated by the relation between identity and politics. Beyond Identity Politics examines the implications of recent theorizing on difference, identity and subjectivity for theories of patriarchy and feminist politics.

Organised around the three central themes of subjectivity, power and politics, this book focuses on a question which feminists struggled with and were divided by throughout the last decade, that is: how to theorize the relation between the subject and politics. In this thoughtful engagement with these debates Moya Lloyd argues that the turn to the subject in process does not entail the demise of feminist politics as many feminists have argued. She demonstrates how key ideas such as agency, power and domination take on a new shape as a consequence of this radical rethinking of the subject-politics relation and how the role of feminist political theory becomes centred upon critique.

A resource for feminist theorists, women's and gender studies students, as well as political and social theorists, this is a carefully composed and wide-ranging text, which provides important insights into one of contemporary feminism's most central concerns.

"Lloyd begins by addressing the complex, dynamic, unstable, and messy relationship between subject constitution and politics. She focuses on the space between essentialism and antiessentialism to examine what feminist politics looks like from the perspective of fluid and open identities. Rather than leading to the demise of feminist politics, this approach, she argues, gives ideas about power, domination, agency, and resistance a more powerful ability to critique." -- C. Shrewsbury * CHOICE *
"A core addition to academic library Women's Studies and Political Science reference collections, Beyond Identity Politics is very strongly recommended for anyone searching for a grasp of modern gender politics concerning the treatment and perspectives of women in the political arena." -- Wisconsin Bookwatch * The Political Science Shelf *

Introduction The Subject and Politics Re-Imagining the Feminist Subject Accounting for Specificity and Difference Essentialism - A Risk Worth Taking? Power and Domination Agenda and Resistance The Politics of Critique Politics and Parody Radical Democracy and Inessential Coalitions Conclusion Interrogating The Political

GOR010109961
Beyond Identity Politics: Feminism, Power and Politics by Moya Lloyd
Moya Lloyd
Used - Good
Paperback
SAGE Publications Ltd
2005-04-13
208
0803978855
9780803978850
N/A
Book picture is for illustrative purposes only, actual binding, cover or edition may vary.
This is a used book - there is no escaping the fact it has been read by someone else and it will show signs of wear and previous use. Overall we expect it to be in very good condition, but if you are not entirely satisfied please get in touch with us.