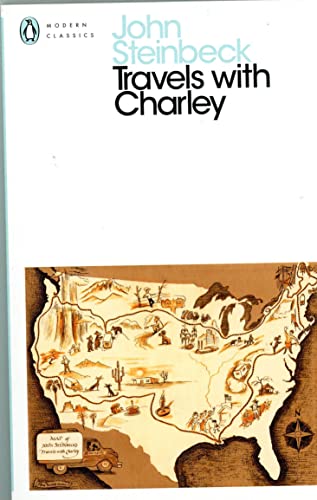 In Stock
$19.49
inc. GST
Moving through the woods and deserts, dirt tracks and highways to large cities and glorious wildernesses, the author observed America, and the Americans who inhabited it. What he saw was a lonely, generous nation too packed with individuals for single judgements; what he saw made him proud, angry, sympathetic and elated.
Very Good Good Well Read
9 in stock

Travels with Charley: In Search of America by Mr John Steinbeck

In 1960, John Steinbeck set out in his pick-up truck with his dog Charley to rediscover and chronicle his native USA, from Maine to California.

He felt that he might have lost touch with its sights, sounds and the essence of the American people. Moving through the woods and deserts, dirt tracks and highways to large cities and glorious wildernesses, Steinbeck observed - with remarkable honesty, insight and a humorous eye - the gamut of America and the people who inhabited it.

His 10,000-mile journey took him through almost forty states, where he saw things that made him proud, angry, sympathetic and elated. A rugged and passionate adventure of self-identity, Steinbeck's vision of the changing world still speaks to us prophetically through the decades.

'Delightful. This is a book to be read slowly for its savor.' The Atlantic

Nobel Prize-winning author John Steinbeck is remembered as one of the greatest and best-loved American writers of the twentieth century. His novels have been huge best-selllers in the UK for many years. Steinbeck's complete works will be available in Penguin Modern Classics.

GOR001228818
Travels with Charley: In Search of America by Mr John Steinbeck
Mr John Steinbeck
Penguin Modern Classics
Used - Very Good
Paperback
Penguin Books Ltd
2001-03-01
240
0141186100
9780141186108
N/A
Book picture is for illustrative purposes only, actual binding, cover or edition may vary.
This is a used book - there is no escaping the fact it has been read by someone else and it will show signs of wear and previous use. Overall we expect it to be in very good condition, but if you are not entirely satisfied please get in touch with us.