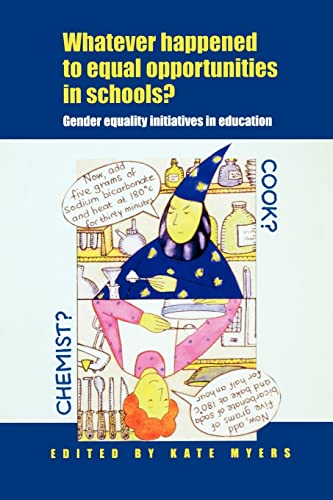 Whatever Happened to Equal Opportunities in Schools?
by MYERS

Used Price
$12.99
inc. GST
Free Shipping in Australia
Makes contribution to the debate about equal opportunities. This book addresses the question of boys' achievement. It is suitable for various educators with an interest in promoting gender equality in schools.
Well Read

Whatever Happened to Equal Opportunities in Schools? Summary

Whatever Happened to Equal Opportunities in Schools? by MYERS

Whatever Happened to Equal Opportunities in Schools? is an edited book which makes an important contribution to the current debate about equal opportunities. Today the dominant concern is about boys' achievement but it was not alway thus! Contributors trace events relating to schools since the introduction of the Sex Discrimination Act and the establishment of the Equal Opportunities Commission in the mid seventies. Prior to the advent of the National Curriculum it was common practice for boys and girls to take different subjects and be offered very different opportunities and experience through the overt and covert school curriculum. Initiatives emerging from central government, quangos, trade unions, local education authorities, and individual schools are described. The book discusses how much has really changed, the extent to which credit should be given to earlier initiatives concerned with the raising of girls aspirations and achievement, what can we learn from these initiatives and what we should really be concerned about now. The book also addresses the question of boys achievement both past and present and will be important reading for all educators with an interest in promoting gender equality in schools.

Kate Myers is Professor of Professional Development in Education at the University of Keele. Previously she was an Associate Director of the International School Effectiveness and Improvement Centre, Institute of Education, University of London, and a freelance education consultant. Before going into higher education she was the Project Manager of the Schools Make A Difference (SMAD) project in the London borough of Hammersmith and Fulham. She has previously been a pastoral head in an ILEA comprehensive school, ILEA co-ordinator of the Schools' Council's Sex Differentiation Project, an advisory teacher, director of the SCDE/EOC Equal Opportunities Project, and a senior inspector in the London borough of Ealing.

Preface
How did we get here?
Prudence and progress
national policy for equal opportunities (gender) in schools since 1975
Challenging inequalities in the classroom
the role and contribution of the Equal Opportunities Commission
Equal to the task?
the role of the NUT in promoting equal opportunities in schools
An episode in the thirty years war
race, sex and class in the ILEA 1981-1990
Now you see it now you don't
gender equality work in Brent, 1982-1988
Did it make a difference?
the Ealing experience 1987-1989
Was there really a problem?
the Schools Council Sex Differentiation Project 1981-1983
Has the mountain moved?
the girls into science and technology project 1979-1983
Working with boys
Hackney Downs school 1980-1985
Teachers, femocrats and academics
activism in London in the 1980s
A black perspective
When Ms Muffet fought back
a view of work on children's books since the 1970s
Lessons learned?
Index.

GOR010756459
Whatever Happened to Equal Opportunities in Schools? by MYERS
MYERS
Used - Well Read
Paperback
Open University Press
2000-01-01
256
0335203035
9780335203031
N/A
Book picture is for illustrative purposes only, actual binding, cover or edition may vary.
This is a used book. We do our best to provide good quality books for you to read, but there is no escaping the fact that it has been owned and read by someone else previously. Therefore it will show signs of wear and may be an ex library book.