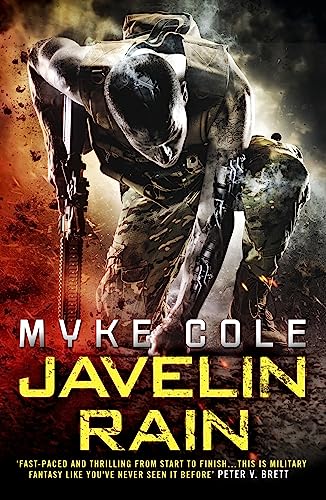 For the dead, war never ends...

Javelin: the loss of a national security asset with strategic impact
Rain: a crisis of existential proportions
Javelin Rain incidents must be resolved immediately, by any means necessary, no matter the cost...

Being a US Navy SEAL was Jim Schweitzer's life until the day he was killed.

Now, his escape from the government that brought him back from the dead has been coded 'Javelin Rain'. Schweitzer and his family are on the run from his unit and, while he may be immortal, his wife and son are not.

It's up to Jim to keep his family safe and free from the clutches of his former masters, whose plans could spell disaster not only for him, but for the entire nation...

What readers are saying about Javelin Rain:

'Javelin Rain is phenomenal and brilliant. For the first time, Myke Cole has me in tears. I eagerly await the next one'

'Tough, gritty, fast-paced fantasy. Hard to put down once you start reading'

As a security contractor, government civilian and military officer, Myke Cole's career has run the gamut from Counterterrorism to Cyber Warfare to Federal Law Enforcement. He has done three tours in Iraq and was recalled to serve during the Deepwater Horizon oil spill. in 2016 he was selected to be a Hunter on the CBS TV series, Hunted, airing in early 2017. A lifelong fan of fantasy novels, comic books and Dungeons & Dragons, Myke now lives in Brooklyn, New York.

GOR007736634
Javelin Rain (Reawakening Trilogy 2): A fast-paced military fantasy thriller by Myke Cole
Myke Cole
Reawakening Trilogy
Used - Very Good
Paperback
Headline Publishing Group
2016-04-07
384
147221191X
9781472211910
N/A
Book picture is for illustrative purposes only, actual binding, cover or edition may vary.
This is a used book - there is no escaping the fact it has been read by someone else and it will show signs of wear and previous use. Overall we expect it to be in very good condition, but if you are not entirely satisfied please get in touch with us.