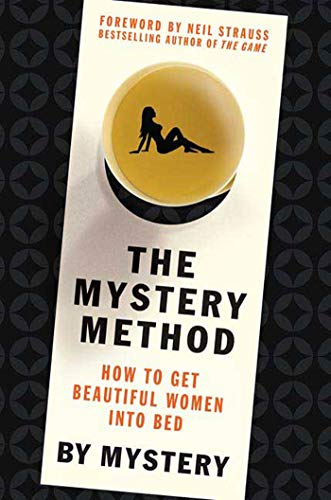 The Mystery Method
by Mystery

Out of Stock
$22.99
inc. GST
Mystery, considered by many to be the world's greatest pickup artist, gained mainstream public attention for his role in Neil Strauss's "New York Times" bestselling expose, "The Game". Here, he talks about the method he developed over years of observing social dynamics and interacting with women in clubs.
Very Good
Only 0 left

The Mystery Method by Mystery

For every man who always wondered why some guys have all the luck, Mystery, considered by many to be the world's greatest pickup artist, finally reveals his secrets for finding and forming relationships with some of the world's most beautiful women. Mystery gained mainstream public attention for his role in Neil Strauss's "New York Times" bestselling expose, "The Game". Now, he has written the definitive handbook on the art of the pickup. He developed his unique method over years of observing social dynamics and interacting with women in clubs to learn how to overcome the guard that many women put up to deflect come-ons from "average frustrated chumps." His tips include: give more attention to her less attractive friend at first, so your target will get jealous and try to win your attention; always approach a target within three seconds of noticing her; if a woman senses your hesitation, her perception of your value will be lower; don't be picky; approach as many groups of people in a bar as you can and entertain them with fun conversation. As you move about the room, positive perception of you will grow. Now it's easy to meet anyone you want; and, smile. Guys who don't get laid, don't smile.

Mystery is the alter-ego of entertainer Erik von Markovik, the star of VH1's The Pickup Artist and the world's foremost expert in the art and science of social dynamics. Mystery exploded onto the underground pickup and seduction scene in the late 1990s with his groundbreaking contributions to the art, and he was the first pickup instructor to offer live, in-field training. Mystery has trained thousands of students all over the world, including a who's who of the most respected pickup artists teaching today. Mystery gained international prominence when his exploits were documented in Neil Strauss' 2005 bestseller The Game: Penetrating the Secret Society of Pickup Artists, and he has also been covered by a wide variety of media including CNN, Conan O'Brien, and The New York Times.

GOR001514596
The Mystery Method by Mystery
Mystery
Used - Very Good
Hardback
St Martin's Press
2006-12-09
240
0312360118
9780312360115
N/A
Book picture is for illustrative purposes only, actual binding, cover or edition may vary.
This is a used book - there is no escaping the fact it has been read by someone else and it will show signs of wear and previous use. Overall we expect it to be in very good condition, but if you are not entirely satisfied please get in touch with us.