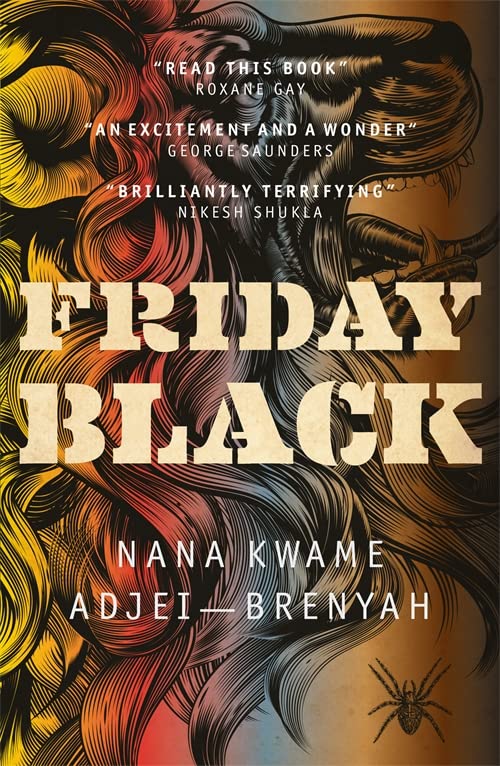 Friday Black: 'an excitement and a wonder' George Saunders by Nana Kwame Adjei-Brenyah

Racism, but "managed" through virtual reality

Black Friday, except you die in a bargain-crazed throng

A Publisher's Weekly Most Anticipated Book for Fall 2018

Friday Black tackles urgent instances of racism and cultural unrest, and explores the many ways we fight for humanity in an unforgiving world. In the first, unforgettable story of this collection, The Finkelstein Five, Adjei-Brenyah gives us an unstinting reckoning of the brutal prejudice of the US justice system. In Zimmer Land we see a far-too-easy-to-believe imagining of racism as sport. And Friday Black and How to Sell a Jacket as Told by Ice King show the horrors of consumerism and the toll it takes on us all.

Fresh, exciting, vital and contemporary, Friday Black will appeal to people who love Colson Whitehead's Underground Railroad, the TV show Black Mirror, the work of Kurt Vonnegut and George Saunders, and anyone looking for stories that speak to the world we live in now.

'An excitement and a wonder' George Saunders

'The fiction debut of the year. Bravo young man. We await your encore' Mary Karr

An unbelievable debut, one that announces a new and necessary American voice . . . A dystopian story collection as full of violence as it is of heart. To achieve such an honest pairing of gore with tenderness is no small feat . . . Violence is only gratuitous when it serves no purpose, and throughout Friday Black we are aware that the violence is crucially related to both what is happening in America now, and what happened in its bloody and brutal history . . . In smart, terse prose, Adjei-Brenyah is unflinching, and willing, in most of these 12 stories, to leave us without any apparent hope. But the hope is there or if it isn't hope, it's maybe something better: levelheaded, compassionate protagonists, with just enough integrity and ambivalence that they never feel sentimental. Each of these individuals carries a subtle clarity about what matters most when nothing makes sense in these strange and brutal worlds he builds . . . Adjei-Brenyah's voice here is as powerful and original as Saunders's is throughout Tenth of December . . . [Adjei-Brenyah] is here to signal a warning, or perhaps just to say this is what it feels like, in stories that move and breathe and explode on the page. In Friday Black, the dystopian future Adjei-Brenyah depicts - like all great dystopian fiction - is bleakly futuristic only on its surface. At its center, each story - sharp as a knife - points to right now. * New York Times *
This pitch-dark, brutal, occasionally - mercifully! - funny collection of stories takes on the insidious nature of racism and the horrors of capitalism in equal measure and somehow ends up hopeful on the other side. Friday Black is enraging, it's inventive . . . Much like living through this year, the experience of reading Nana Kwame Adjei-Brenyah's debut can be harrowing, but it's ultimately a pleasure to be in the company of a new voice as exciting as this. * Vogue *
Reading Nana Kwame Adjei-Brenyah's debut short story collection Friday Black is like being shaken awake. These stories exist in a sort of hyperreality, ordinary characters living in the not-so-unbelievable, Black Mirror-esque future of a culture that doesn't hesitate to commodify cruelty or monetize revolution . . . Adjei-Brenyah skewers the ways we brush past racism and injustice, making the absurdity of the rhetoric around both impossible to ignore. * Buzzfeed *
Yes, anyone who likes Saunders should read Friday Black right away. Anyone who could take or leave Saunders should, too...No comparison can convey a book's intellectual heft, and Friday Black is as intellectually hefty as fiction can get. In these twelve stories, Adjei-Brenyah turns over ideas about racism, about classism and capitalism, about the apocalypse, and, most of all, about the corrosive power of belief. His work is fiercely, spikily funny. And no matter how supernatural his stories get, no matter how zombie-ish or futuristic, every one of them takes place in the world we know...Adjei-Brenyah has some serious powers himself. The energy in his fiction is wild, barely controllable yet perfectly controlled. Short stories, as a form, tend to compress big emotion into small action, but not these. Adjei-Brenyah fits big emotion, big action, and big thought into each story. His violence is never gratuitous, his ghosts never too chain-rattling to believe...Adjei-Brenyah speaks in more voices than seems possible, and those voices will follow you off the page...They will assert themselves, over and over. I'm here, these stories say. Sit up. Pay attention. I'm here. * NPR *
Like Kurt Vonnegut, the debut author introduces readers to worlds adjacent to our reality. They're familiar enough for us to recognize ourselves within them - until Adjei-Brenyah takes the tough-to-stomach parts of humanity to extremes, like Black Friday shoppers turning into violent, materialistic murderers. The stories wrestle with racism, mob mentality, police violence, and unrestrained consumerism. They're quick to read, and incredibly hard to forget. * Elle "Best Books of the Year so Far" *
Imagine a cross between Get Out and Ralph Ellison's Invisible Man, and you'll have a sense of what awaits readers of this audacious debut: darkly absurdist tales that take the horrors of racism to surreal new levels. * O, the Oprah Magazine *
Adjei-Brenyah dissects the dehumanizing effects of capitalism and racism in this debut collection of stingingly satirical stories... Adjei-Brenyah has put readers on notice: his remarkable range, ingenious premises, and unflagging, momentous voice make this a first-rate collection. * Publishers' Weekly (Starred Review) *
An absolutely unmissable debut * Stylist *
Friday Black has the thrilling strangeness of George Saunders but driven by a deep and justified anger about the racism and violence that constitute the bedrock of American society. It's a rollercoaster ride -- Mark Haddon * Observer *

Nana Kwame Adjei-Brenyah is from Spring Valley, New York. He graduated from SUNY Albany and went on to receive his MFA from Syracuse University.

GOR010031987
Friday Black: 'an excitement and a wonder' George Saunders by Nana Kwame Adjei-Brenyah
Nana Kwame Adjei-Brenyah
Used - Very Good
Paperback
Quercus Publishing
2018-10-23
208
1787476707
9781787476707
N/A
Book picture is for illustrative purposes only, actual binding, cover or edition may vary.
This is a used book - there is no escaping the fact it has been read by someone else and it will show signs of wear and previous use. Overall we expect it to be in very good condition, but if you are not entirely satisfied please get in touch with us.