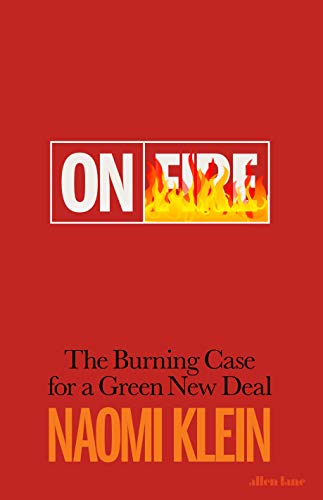 On Fire
by Naomi Klein

On Fire: The Burning Case for a Green New Deal by Naomi Klein

'Naomi Klein's work has always moved and guided me. She is the great chronicler of our age of climate emergency, an inspirer of generations' - Greta Thunberg

For more than twenty years Naomi Klein's books have defined our era, chronicling the exploitation of people and the planet and demanding justice. On Fire gathers for the first time more than a decade of her impassioned writing from the frontline of climate breakdown, and pairs it with new material on the staggeringly high stakes of what we choose to do next.

Here is Klein at her most prophetic and philosophical, investigating the climate crisis not only as a profound political challenge but also as a spiritual and imaginative one. Delving into topics ranging from the clash between ecological time and our culture of 'perpetual now,' to rising white supremacy and fortressed borders as a form of 'climate barbarism,' this is a rousing call to action for a planet on the brink.

With dispatches from the ghostly Great Barrier Reef, the smoke-choked skies of the Pacific Northwest, post-hurricane Puerto Rico and a Vatican attempting an unprecedented 'ecological conversion,' Klein makes the case that we will rise to the existential challenge of climate change only if we are willing to transform the systems that produced this crisis.

This is the fight for our lives. On Fire captures the burning urgency of the climate crisis, as well as the energy of a rising political movement demanding change now.

Naomi Klein's work has always moved and guided me. She is the great chronicler of our age of climate emergency, an inspirer of generations -- Greta Thunberg
The greatest theorist of climate change. -- Amitav Ghosh
Naomi Klein applies her fine, fierce and meticulous mind to the greatest, most urgent questions of our times. . . . I count her among the most inspirational political thinkers in the world today. -- Arundhati Roy
Naomi is like a great doctor - she can diagnose problems nobody else sees. -- Alfonso Cuaron
Naomi Klein is a precious gift: every time I read her words, my heart leaps from sadness and anger to action. She takes us deep, down to the roots of what is wrong - and then up, up to a height from which we can see what must be done. Everything we love is at stake now: these writings are our best and brightest hope. -- Emma Thompson
A critically important thought-leader in these perilous times, a necessary voice as a courageous movement of movements rises from the ashes. -- Michelle Alexander, author of THE NEW JIM CROW
An invigorating message of climate hope through social transformation. Bring on the revolution. -- Fred Pearce * New Scientist *
In On Fire, the longstanding critic of corporate globalisation argues for a much more comprehensive economic reboot ... a long-lensed critique about humanity's relationship to nature. -- Jonathan Ford * Financial Times *
A hopeful vision of the future ... In these extraordinary times it should appeal to a new set of readers looking for extreme solutions to match the extremity of the crisis. This is Klein doing what she does best: 'not being polite and not playing by the rules'. -- Harriet Constable * Geographical Magazine *
A powerful and righteous blast against defeatism. -- Andrew Lynch * Business Post *

Naomi Klein is an award-winning journalist, syndicated columnist and author of the international bestsellers No Logo, The Shock Doctrine, This Changes Everything: Capitalism vs the Climate, and No Is Not Enough: Defeating the New Shock Politics. In 2017 she joined The Intercept as Senior Correspondent. Recent articles have also appeared in the Guardian, The Nation, The New York Times, the New Yorker and Le Monde. In November 2016 she was awarded the Sydney Peace Prize in Australia.

GOR010082147
On Fire: The Burning Case for a Green New Deal by Naomi Klein
Naomi Klein
Used - Very Good
Hardback
Penguin Books Ltd
2019-09-17
320
024141072X
9780241410721
N/A
Book picture is for illustrative purposes only, actual binding, cover or edition may vary.
This is a used book - there is no escaping the fact it has been read by someone else and it will show signs of wear and previous use. Overall we expect it to be in very good condition, but if you are not entirely satisfied please get in touch with us.