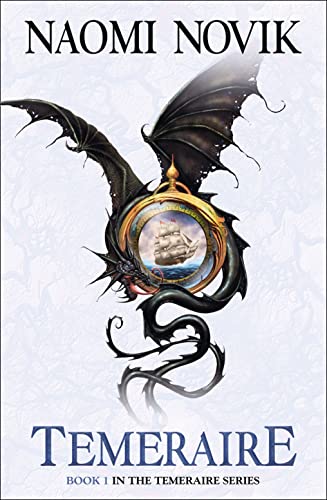 Captain Will Laurence has been at sea since he was just twelve years old; finding a warmer berth in Nelson's navy than any he enjoyed as the youngest, least important son of Lord Allendale. Rising on merit to captain his own vessel, Laurence has earned himself a beautiful fiancee, society's esteem and a golden future. But the war is not going well. It seems Britain can only wait as Napoleon plans to overrun her shores.

After a skirmish with a French ship, Laurence finds himself in charge of a rare cargo: a dragon egg bound for the Emperor himself. Dragons are much prized: properly trained, they can mount a fearsome attack from the skies. One of Laurence's men must take the beast in hand and join the aviators' cause, thus relinquishing all hope of a normal life.

But when the newly-hatched dragon ignores the young midshipman Laurence chose as its keeper and decides to imprint itself on the horrified captain instead, Laurence's world falls apart. Gone is his golden future: gone his social standing, and soon his beautiful fiancee, as he is consigned to be the constant companion and trainer of the fighting dragon Temeraire...

'Novik won me over with her first novel. the combination of history, sympathetic characters, and an engaging style makes this series great, intelligent fun.'
The Times

Naomi lives in New York City with her husband and six computers. Her website and livejournal are at www.temeraire.org.

GOR001619484
Temeraire (The Temeraire Series, Book 1) by Naomi Novik
Naomi Novik
The Temeraire Series
Used - Very Good
Paperback
HarperCollins Publishers
2007-08-06
352
0007258712
9780007258710
N/A
Book picture is for illustrative purposes only, actual binding, cover or edition may vary.
This is a used book. We do our best to provide good quality books for you to read, but there is no escaping the fact that it has been owned and read by someone else previously. Therefore it will show signs of wear and may be an ex library book.