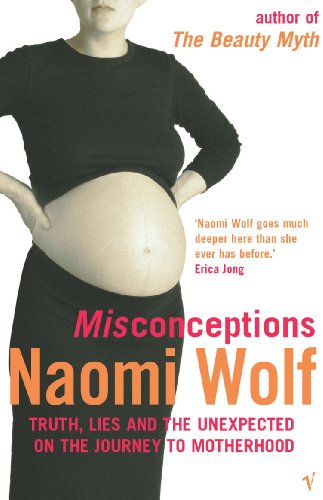 Out of Stock
$25.99
inc. GST
Every year, millions of women have their lives turned inside out by the experience of pregnancy. This book takes a critical look at the powerful vested interests in the pregnancy business and at the social message coming at women: an amalgam of sentimentality, psychologically dangerous half-truths and conflicting ideologies.
Very Good
Only 0 left

Every year, millions of women have their lives turned inside out by the experience of pregnancy. A contemporary woman find herself caught in an absurd paradox: while in the grip of one of the most primal, lonely, sensual and, in some ways, psychologically debilitating and physically dangerous experiences, she is overwhelmed by invasive, trivialising and infantilising cultural messages about what is happening to her - and who really owns the experience.

"Wolf's many bold demands... give us pause and present challenges: society should restructure itself to accommodate babies" * Guardian *
"Wolf's polemic is as clear and sure as ever" * Observer *
"Misconceptions reminds us that pregnancy and birth are still swaddled in layers of illusion, that our society remains criminally hypocritical toward mothers... Naomi Wolf goes much deeper here than she ever has before. She strips bare the mind of the pregnant woman and new mother with dazzling courage" -- Erica Jong
"Fiercely confident and uncompromising" * Publishers Weekly *

Naomi Wolf is a bestselling American writer, known for her advocacy of feminism and progressive politics. She became internationally famous with the publication of her first book, The Beauty Myth, in 1991, and has gone on to write a subsequent six titles including: Fire with Fire, Promiscuities, Misconceptions and The Tree House.

GOR000930817
Misconceptions by Naomi Wolf
Naomi Wolf
Used - Very Good
Paperback
Vintage Publishing
2002-10-01
288
0099274167
9780099274162
N/A
Book picture is for illustrative purposes only, actual binding, cover or edition may vary.
This is a used book - there is no escaping the fact it has been read by someone else and it will show signs of wear and previous use. Overall we expect it to be in very good condition, but if you are not entirely satisfied please get in touch with us.