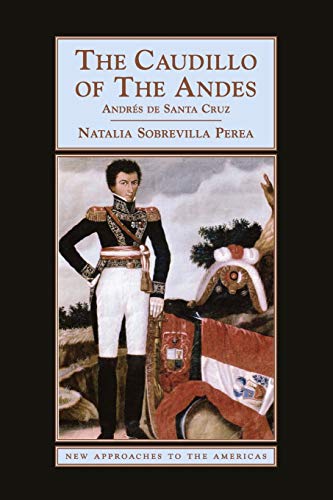 The Caudillo of the Andes
by Natalia Sobrevilla Perea (University of Kent, Canterbury)

Used Price
$38.99
inc. GST
Free Shipping in Australia
Born in La Paz in 1792, Andres de Santa Cruz lived through the turbulent times that led to independence across Latin America. The story of his life introduces students to broader questions of nationality and identity during this turbulent transition from Spanish colonial rule to the founding of Peru and Bolivia.
Very Good

The Caudillo of the Andes Summary

Born in La Paz in 1792, Andres de Santa Cruz lived through the turbulent times that led to independence across Latin America. He fought to shape the newly established republics, and between 1836 and 1839 he created the Peru-Bolivia Confederation. The epitome of an Andean caudillo, with armed forces at the center of his ideas of governance, he was a state builder whose ambition ensured a strong and well-administered country. But the ultimate failure of the Confederation had long-reaching consequences that still have an impact today. The story of his life introduces students to broader questions of nationality and identity during this turbulent transition from Spanish colonial rule to the founding of Peru and Bolivia.

The Caudillo of the Andes Reviews

'This book is a most welcome addition to the literature on politics, caudillismo, and state formation in post-Independence Latin America. The Caudillo of the Andes offers an engaging and fascinating account of one of the most important South American statesmen, inexplicably forgotten by most contemporary historians.' Carlos Aguirre, University of Oregon
'Both scholarly and fascinating, this unprecedented biography of General Andres de Santa Cruz highlights the complexities and many meanings of nineteenth-century military caudillos in South America - in this case, one whose pan-Andean legacy still echoes today.' Paul Gootenberg, Stony Brook University
'Natalia Sobrevilla Perea has written an accessible and smart biography of Andres de Santa Cruz, the fascinating Bolivia caudillo who was a worldly liberal, fervent nationalist, Francophile, defender of indigenous people, and innovative but ultimately failed statemaker. The Caudillo of the Andes addresses Latin America's never-ending riddle of strongman rule and is particularly timely as tensions among Bolivia, Peru, and Chile continue. This is an important book that will be much used in the classroom.' Charles Walker, University of California, Davis

Natalia Sobrevilla Perea is Lecturer in Hispanic Studies at the University of Kent. She has published widely on the political, social and intellectual history of Peru and the Andes and is currently leading a project to digitize nineteenth-century newspapers in regional archives in Peru, funded by the British Library. Dr Sobrevilla Perea was previously a pre-doctoral Fellow and then a lecturer at Yale University.

GOR009827789
The Caudillo of the Andes: Andres de Santa Cruz by Natalia Sobrevilla Perea (University of Kent, Canterbury)
Natalia Sobrevilla Perea (University of Kent, Canterbury)
New Approaches to the Americas
Used - Very Good
Paperback
Cambridge University Press
2011-01-31
256
0521719968
9780521719964
N/A
Book picture is for illustrative purposes only, actual binding, cover or edition may vary.
This is a used book - there is no escaping the fact it has been read by someone else and it will show signs of wear and previous use. Overall we expect it to be in very good condition, but if you are not entirely satisfied please get in touch with us.