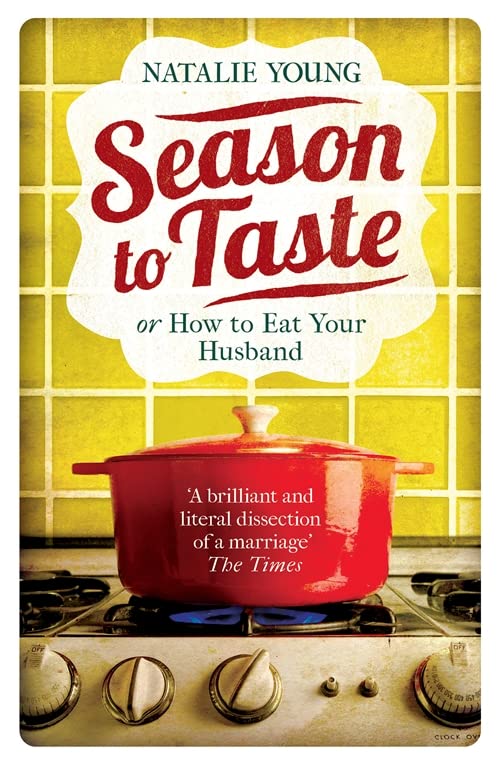 Used Price
$15.49
inc. GST
Free Shipping in Australia
The most subversive and gloriously unexpected novel you'll ever read about the end of a marriage and its aftermath.
Reviews:
Trustpilot
Very Good

Season to Taste or How to Eat Your Husband Summary

Always let the meat rest under foil for at least ten minutes before carving...

No one has seen Lizzie's husband, Jacob, for a few days. That's because last Monday, on impulse, Lizzie caved in the back of his head with a spade. And if she's going to embark on the new life she feels she deserves after thirty years in Jacob's shadow, she needs to dispose of his body. Her method appeals to all her practical instincts, though it's not for the faint-hearted. Will Lizzie have the strength to follow it through?

Dark, funny and achingly human, Season to Taste is a deliciously subversive treat. In the shape of Lizzie Prain, Natalie Young has created one of the most remarkable heroines in recent fiction.

Customer Reviews - Season to Taste or How to Eat Your Husband

Season to Taste or How to Eat Your Husband Reviews

A stomach-turning and terrific novel...a brilliant and literal dissection of a marriage * The Times *
Engrossingly depicts not only bodily appetite but the deepest emotional hunger pangs of being human...compulsively readable * Observer *
Daring, groundbreaking and original * Irish Independent *
One of the most talked-about books of the year...filled with black humour * Daily Mail *
Stomach-churning and terrific * The Times *
An enjoyable feast of anger - witty and poised -- Deborah Levy, author of Swimming Home
'Season to Taste is written in a laconic, pared-down style that immediately brings to mind Camus' L'Etranger. If that seems a somewhat grand comparison, it is not, for Young's book is one of those rare beasts - a literary novel of ideas written in simple language that could be both a university set text and a supermarket bestseller' -- Tom Tivnan, The Bookseller
Set to be one of the most talked about - and most gruesome - books of 2014 * The Sunday Times *
Young delivers an authentic portrait of a neglected marriage, and her light and compelling prose carries this macabre tale along * The List *
Season to Taste is a modern-day fable about the end of love and moving on. Natalie Young has given us a shockingly, thrillingly new vantage on a timeless story of marriage's demise -- Stefan Merill Block, author of The Story of Forgetting
2014's most talked-about novel * Harper's Bazaar *
'Brilliantly disturbing... echoes of Roald Dahl's dark adult fiction... fascinating in the most gruesome way. Delicious!' * Image *
Move over Fifty Shades, there's a brand new genre whipping the publishing world into a murderous frenzy * Evening Standard *
Young has created one of the most memorable literary anti-heroines... A beautifully nuanced and gentle portrayal of a quietly desperate woman * Sunday Express *
If prizes were given out for this year's most unreliable narrator, Lizzie Prain would be the one to beat * New York Times *
This darkly funny book will leave you craving more as Young charts the extraordinary disposal process with unerring and at times uncomfortable detail and triumphs by blending social satire with biting wit * Daily Express *
A wholly unique and brilliantly witty dark comedy * Heat *
I couldn't resist...Tasty! * Woman and Home *
Dark and twisted, but beautifully written with a sprinkling of humour * Stylist *
Not for the faint-hearted, this is a brilliant dark tale of an unassuming woman trying to cook her way out of her murderous predicament * Closer *
Is this the female American psycho? Quite possibly * Grazia *
Young is relentless in poking our food-obsessed culture right in the eye. This book, however, is so much more than a slicing satire. It is a thriller in the truest sense. I swallowed it whole, eager and enthralled. The narrative is crisp and snappy, the dialogue sparse, the pace never skips a beat. Lizzie Prain's isolation is palpable, her despair is as hot and urgent as her blind panic. It is a rare gem, this novel, appealing to the popular fiction market and equally providing a gluttonous feast for the literati * Irish Independent *
Young writes in a wonderfully detached, dry-as-a-bone (!) style. A thunderclap, definitely * Daily Mail *

Natalie Young was born in London in 1976. She studied English at Bristol University and published her first novel, We All Ran Into the Sunlight, in 2011 while working as the Arts and Books Editor of Prospect Magazine. For several years before that she bought books for serialisation in The Times and contributed regularly to the Books section and to the Saturday Review. Season to Taste or How to Eat Your Husband was published to great critical acclaim and commercial success in the UK in 2014 and has sold into a further seven foreign territories. Natalie is now writing the screenplay for Season to Taste while also working on her third novel as part of a Creative Writing PhD at Goldsmiths, University of London. She lives in London with her two children.

GOR005890530
Season to Taste or How to Eat Your Husband by Natalie Young
Natalie Young
Used - Very Good
Paperback
Headline Publishing Group
2014-07-03
304
1472209397
9781472209399
N/A
Book picture is for illustrative purposes only, actual binding, cover or edition may vary.
This is a used book - there is no escaping the fact it has been read by someone else and it will show signs of wear and previous use. Overall we expect it to be in very good condition, but if you are not entirely satisfied please get in touch with us.