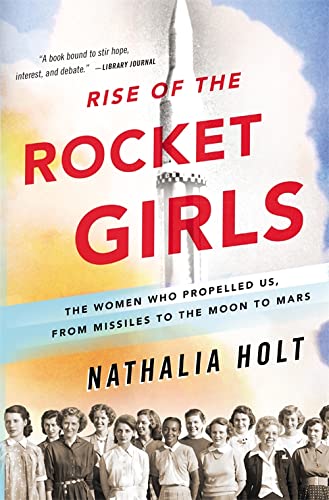 Rise of the Rocket Girls
by Nathalia Holt

Out of Stock
$18.49
inc. GST
"Holt reveals the fascinating untold story of the heroic women who made America's space program possible." --Cate Lineberry, author of The Secret Rescue
Good
Only 0 left

Rise of the Rocket Girls Summary

Rise of the Rocket Girls: The Women Who Propelled Us, from Missiles to the Moon to Mars by Nathalia Holt

In the 1940s and 50s, when the newly minted Jet Propulsion Laboratory needed quick-thinking mathematicians to calculate velocities and plot trajectories, they recruited an elite group of young women who, with only pencil, paper, and mathematical prowess, transformed rocket design, helped bring about the first American satellites, and made the exploration of the solar system possible. Rise of the Rocket Girls tells the stories of these women--known as "human computers"--who broke the boundaries of both gender and science. Based on extensive research and interviews, Nathalia Holt offers a unique perspective on the role of women in science: both where we've been, and the far reaches of space to which we're heading.

Rise of the Rocket Girls Reviews

"Holt's book shines portraying the mathematical and engineering process behind JPL's many iconic spaceflight missions--including America's first satellite, Explorer 1, and the Voyager probes that explored the solar system--as well as the women's personal lives and the evolution of their unusual roles inside the male-dominated workplace."
--Space.com
A New York Times bestseller
A Los Angeles Times bestseller
An Amazon Best Book of 2016
An Entertainment Weekly "10 Books You Have to Read in April"
An Elle "8 Books by Women for Bill Gates to Read This Summer"
Goodreads Choice Awards finalist

"Illuminating...these women are vividly depicted at work, at play, in and out of love, raising children--and making history. What a team--and what a story!"
--Gene Seymour, USA Today (3.5 stars/4)

"Rise of the Rocket Girls reveals the fascinating untold story of the heroic women who made America's space program possible. We owe much to these brilliant female pioneers in science-and to Nathalia Holt for reminding us of their extraordinary contributions."
--Cate Lineberry, author of The Secret Rescue: An Untold Story of American Nurses and Medics Behind Nazi Lines
"A marvelous book.... When Neil Armstrong made his 'giant leap for mankind, ' there was womankind in the control room."
--Maria Popova, Brain Pickings

"A must read for any women in tech or interested in technology!"--Girls Who Code

"An inspiring, beautiful book. Nathalia Holt has a gift for capturing the joys and fears of scientists working at the edge of possibility. By profiling the women who learned to keep American rockets flying true, she paints the dawn of the space age with new and vivid colors."--Jason Fagone, author of Ingenious: A True Story of Invention, Automotive Daring, and the Race to Revive America
"An intriguing account of the young, female 'human computers' who worked at Caltech's JPL. Be inspired by their work on America's first satellite and other groundbreaking projects, against the social backdrop of the Space Age, slowly changing gender norms, and the dawn of computers."--Estelle Tang, Elle, "5 Books That You Can Read With Your Mom"

"Engaging.... A fresh contribution to women's history.... Besides chronicling the development of America's space program, Holt recounts the women's private lives-marriages, babies, and the challenge of combining motherhood and work-gleaned from her interviewees' vivid memories."
--Kirkus
"Heartfelt.... An accessible and human-centered history.... Holt cheerfully describes the women of JPL (and JPL itself), their triumphs, and the inevitable questions about when they would marry and quit working to raise families."
--Publishers Weekly, Starred Review
"Holt argues that these women's calculations played an under-appreciated part in NASA's towering achievements.... Here, math is dramatic, not mundane. Calculating is a physical, even athletic, act.... Holt depicts the human computers' life stories vividly."
--Jennifer Light, Nature
"Holt deserves credit for bringing this story to light....she is able to offer a backstage view of the bumpy start of the Space Age."--Julia M. Klein, Boston Globe

"Holt does a fine job balancing the personal stories of these women with the technical discussions of their work ....Rise of the Rocket Girls tells a fascinating story of the women who made largely unseen yet essential contributions to the early history of spaceflight."
--Jeff Foust, The Space Review

"Holt gives voice to the seldom-recognized female mathematicians and scientists who shaped NASA in its earliest years and beyond."--ALA Magazine
"Holt investigates the fascinating lives and important contributions of these women, who defied the sexist stereotypes of their times to play pivotal roles in sending the first rockets beyond Earth."
--Scientific American
"Holt seamlessly blends the technical aspects of rocket science and mathematics with an engaging narrative, making for an imminently readable and well-researched work."--Crystal Goldman, Library Journal (Starred Review, Editors' Choice Pick)
"I stole sleep to finish this book and was happy to do so. I admire how Holt gives voice to a group of important (and lesser-known) female scientists who have in the past
been overshadowed by their male counterparts. The domestic and the scientific are elegantly rendered--it is an impressive contribution to American history and I was sad to turn the last page."
--TaraShea Nesbit, bestselling author of The Wives of Los Alamos
"Immersive, evocative.... Superbly readable.... Holt's poignant narrative should be required reading."
--Maya Gittelman, Bookreporter
"Incredible....Holt unveils this forgotten history with nuance and insight."
--Laurel Raymond, Think Progress

"Inspiring and thought-provoking, this book will change the way you look at the history of space travel--as well as its future."--Katherine Handcock, A Mighty Girl, "25 New Mighty Girl Books for Early Spring"

"Nathalia Holt has written a gorgeously exciting book about an overlooked group of American women who deserve to have their story known. Inspiring and elegantly-told, this fresh slice of history was impossible to put down."--Claire Bidwell Smith, author of The Rules of Inheritance
"Non-fiction tends to be a good reading slump buster for me, and this one seems perfect."
--Andi Miller, Book Riot
"NASA's 'Rocket Girls' are no longer forgotten history. Thanks to a new book, these female pioneers who helped the U.S. win the space race are finally getting their due... Holt documents the lives of these women, who were not only pioneers in their profession, but also in their personal lives."
--Naomi Shavin, Smithsonian
"Rocket science has long been associated with men...but in Rise of the Rocket Girls, Nathalia Holt shines a light on the women behind the scenes."
--Eliza Thompson, Cosmopolitan, "6 New Books to Read This Month"

"The women's stories are fun, intense, and endearing, and they give a new perspective on the rise of the space age."--Popular Science

"The JPL's earliest days were fueled by math whizzes who happened to be women.... Holt was clearly smitten while interviewing surviving members of the elite group, and conveys that affection while honoring their story."
--Discover
"These women helped change the course of American history. Nathalia Holt tells their remarkable story with heart and verve."
--Martha Ackmann, author of The Mercury 13: The True Story of Thirteen Women and the Dream of Space Flight
"This highly readable, entertaining and informative book tells the story of JPL's 'computers, ' the young women who did the calculations now handled by bits of silicon. Holt brings her characters to life, tracing them from their hiring as JPL began its career with the Army developing missiles for the Cold War through its conversion to NASA's lead center for planetary exploration. She celebrates their lives, achievements, and service to the nation, as well as their excitement at having front row seats to the earliest voyages of solar system exploration. It's a story whose telling is long overdue. We can be grateful for this enjoyable read."
--Dr. Charles Elachi, Director of the Jet Propulsion Laboratory, Vice President of the California Institute of Technology, and Professor of Electrical Engineering and Planetary Science
"We hope the renewed history of the rocket girls continues to inspire more girls and women to pursue STEM fields so the gender gap is sealed once and for all."
--Makers
"Women were obviously just as vital to innovation and progress. Rise of the Rocket Girls proves that by reexamining the space age-specifically, the group of women who redesigned rocket science in the '40s and '50s and made that 'one small step for man' possible in the first place."
--Isabella Biedenharn, Christian Holub, Dana Getz, Entertainment Weekly

Nathalia Holt is the author of Cured: The People Who Defeated HIV and a former fellow at the Ragon Institute of Massachusetts General Hospital, MIT and Harvard University. Her writing has appeared in the Los Angeles Times, New York Times, TheAtlantic.com, Slate, Time.com, and Popular Science. She lives in Boston.

GOR010435021
Rise of the Rocket Girls: The Women Who Propelled Us, from Missiles to the Moon to Mars by Nathalia Holt
Nathalia Holt
Used - Good
Paperback
Little, Brown & Company
2017-01-17
352
0316338907
9780316338905
N/A
Book picture is for illustrative purposes only, actual binding, cover or edition may vary.
The book has been read but remains in clean condition. All pages are intact and the cover is intact. Some minor wear to the spine.