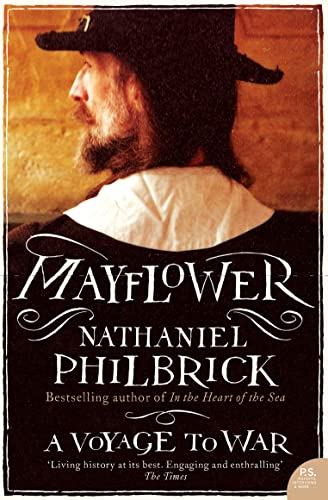 Nathaniel Philbrick, bestselling author of `In the Heart of the Sea', reveals the darker side of the Pilgrim fathers' settlement in the New World, which ultimately erupted in bloody battle some fifty years after they first landed on American soil.

Mayflower: A Voyage to War by Nathaniel Philbrick

Nathaniel Philbrick, bestselling author of `In the Heart of the Sea', reveals the darker side of the Pilgrim fathers' settlement in the New World, which ultimately erupted in bloody battle some fifty years after they first landed on American soil.

Behind the quaint and pious version of the Mayflower story usually taught in American primary schools is a tumultuous and largely untold tale of violence, subterfuge and epic drama.

For amidst the friendships and co-operation that sprang up between the settlers and indigenous people, whose timely assistance on more than one occasion rescued the Pilgrims from otherwise certain death, a dark conflict was brewing. It erupted in King Philip's war, a terribly bloody conflict which decimated the English population and all but obliterated the Wampanoag.

Following the Pilgrims from their perilous journey from England on a battered, leaky ship, through their first bitter North American winter (during which half of them died), to their equally bitter battle against the native Wampanoag tribe, Philbrick paints a vivid and panoramic picture of conflict and colonialism, co-operation and betrayal. In so doing he brings to life a cast of compelling, even heroic, characters, and sets the scene for the development of the American nation.

`Living history at its best. Engaging and enthralling.' The Times

`Philbrick spins a fascinating and richly complex tale. A champion sailor himself, he excels at seafaring scenes..."Mayflower" is an earnest, engaging and spirited work.' Sunday Telegraph

`Brilliantly constructed. This is more than a small, forgotten war in the first days of America's development. It is a case study in folly, fear and ignorance...enthralling.' Observer

Nathaniel Philbrick is a historian and broadcaster who has written extensively about sailing. He is Director of the Egan Institute of Maritime Studies on Nantucket Island, and a research fellow at the Nantucket Historical Association. He was a consultant on the movie `Moby Dick'. Aged 50, he has lived on Nantucket with his wife and two children since 1986.

GOR001823510
9780007151288
0007151284
Mayflower: A Voyage to War by Nathaniel Philbrick
Nathaniel Philbrick
Used - Very Good
Paperback
HarperCollins Publishers
2007-09-28
352
N/A
Book picture is for illustrative purposes only, actual binding, cover or edition may vary.
This is a used book - there is no escaping the fact it has been read by someone else and it will show signs of wear and previous use. Overall we expect it to be in very good condition, but if you are not entirely satisfied please get in touch with us
Trustpilot