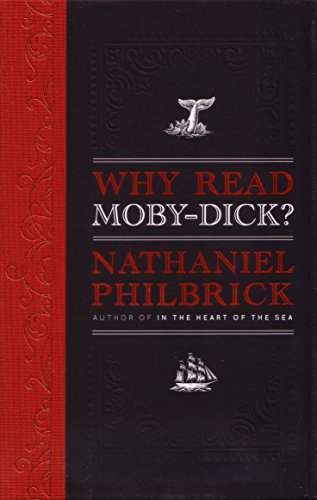 Why Read Moby-Dick?
by Nathaniel Philbrick

Used Price
$48.99
inc. GST
Free Shipping in Australia
"Moby-Dick" is perhaps the greatest of the Great American Novels, yet its length and esoteric subject matter create an aura of difficulty that too often keeps readers at bay. In this book, the author offers a cabin master's tour of this novel rich with adventure and history.
Very Good

Why Read Moby-Dick? by Nathaniel Philbrick

"Moby-Dick" is perhaps the greatest of the Great American Novels, yet its length and esoteric subject matter create an aura of difficulty that too often keeps readers at bay. Fortunately, one unabashed fan wants passionately to give Melville's masterpiece the broad contemporary audience it deserves. In his National Book Award-winning bestseller, "In the Heart of the Sea", Nathaniel Philbrick captivatingly unpacked the story of the wreck of the whaleship Essex, the real-life incident that inspired Melville to write "Moby-Dick". Now, he sets his sights on the fiction itself, offering a cabin master's tour of a spellbinding novel rich with adventure and history. Philbrick skillfully navigates Melville's world and illuminates the book's humor and unforgettable characters-finding the thread that binds Ishmael and Ahab to our own time and, indeed, to all times. A perfect match between author and subject, "Why Read Moby-Dick?" gives us a renewed appreciation of both Melville and the proud seaman's town of Nantucket that Philbrick himself calls home. Like Alain de Botton's "How Proust Can Change Your Life", this remarkable little book will start conversations, inspire arguments, and, best of all, bring a new wave of readers to a classic tale waiting to be discovered anew.


Brilliant and provocative "The New Yorker"


A slim, easy-to-read argument on why you should definitely put ["Moby-Dick"] on your bucket list. "History Wire"


This slender volume is packed with reasons why you might want to read the whaling classic.

This slender, pleasant, sincere book by the maritime historian and naval enthusiast is more than a respectable tribute unencumbered by academic prose. Approaching "Moby-Dick" from outside the academy is refreshing, and Philbrick s enthusiasm is contagious .So put me down for a reading of "Moby-Dick" in 2012, and count Philbrick s book a success. "The New Republic"


Philbrick does the literary world great service by bringing "Moby-Dick" back into popular attention and also by his skill in keeping American history fresh and alive. "Aspen Daily News"


Sure to swell the readership of Melville s masterpiece. "Booklist" (Starred review)


In this cogent and passionate polemic for Melville s masterpiece, Philbrick combines a critical eye and a reader s adoration to make a case for "Moby-Dick" Less lit-crit and more readers guide, this tome will remind fans why they loved the book in the first place, and whet the appetites of trepid potential readers. "Publishers Weekly"


A slim celebration of the elements of a literary masterpiece Philbrick is an enthusiastic salesman for a sometimes daunting novel. "Kirkus"


So you liked Philbrick s "In the Heart of the Sea," which re-created the wreck of the whaleship Essex, inspiration for Herman Melville s "Moby-Dick"? Then you ll love Philbrick s new book From a wonderful and knowing writer. "Library Journal," pre-pub alert"

Nathaniel Philbrick, is a leading authority on the history of Nantucket Island. His In the Heart of the Sea won the National Book Award. His latest book is Sea of Glory, about the epic U.S. Exploring Expedition of 1838-1842. His other books include Away off Shore: Nantucket Island and Its People, 1602-1890 (which Russell Baker called "indispensable") and Abram's Eyes: The Native American Legend of Nantucket Island ("a classic of historical truthtelling," according to Stuart Frank, director of the Kendall Whaling Museum). He has written an introduction to a new edition of Joseph Hart's Miriam Coffin, or The Whale Fisherman, a Nantucket novel (first published in 1834) that Melville relied upon for information about the island when writing Moby Dick.

GOR005279026
Why Read Moby-Dick? by Nathaniel Philbrick
Nathaniel Philbrick
Used - Very Good
Hardback
Penguin Putnam Inc
2012-02-03
144
0670022993
9780670022991
Commended for Chautauqua Prize 2012
Book picture is for illustrative purposes only, actual binding, cover or edition may vary.
This is a used book - there is no escaping the fact it has been read by someone else and it will show signs of wear and previous use. Overall we expect it to be in very good condition, but if you are not entirely satisfied please get in touch with us.