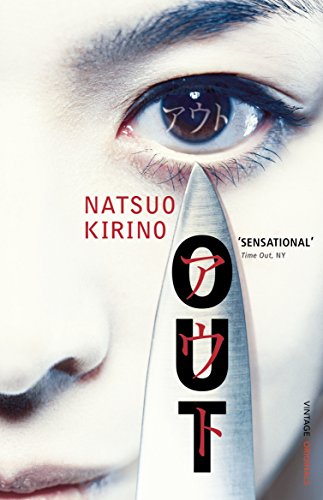 Out
by Natsuo Kirino

Out of Stock
$18.49
inc. GST
The body parts are discovered, the police start asking questions, but the women have far more dangerous enemies -a yakuza connected loan shark who discovers their secret and has a business proposition, and a ruthless nightclub owner the police are convinced is guilty of the murder.
Very Good
Only 0 left

Out by Natsuo Kirino

In the Tokyo suburbs four women work the draining graveyard shift at a boxed-lunch factory. Burdened with chores and heavy debts and isolated from husbands and children, they all secretly dream of a way out of their dead-end lives. A young mother among them finally cracks and strangles her philandering, gambling husband then confesses her crime to Masako, the closest of her colleagues. For reasons of her own, Masako agrees to assist her friend and seeks the help of the other co-workers to dismember and dispose of the body. The body parts are discovered, the police start asking questions, but the women have far more dangerous enemies -a yakuza connected loan shark who discovers their secret and has a business proposition, and a ruthless nightclub owner the police are convinced is guilty of the murder. He has lost everything as a result of their crime and he is out for revenge. OUT is a psychologically taut and unflinching foray into the darkest recesses of the human soul, an unsettling reminder that the desperate desire for freedom can make the most ordinary person do the unimaginable.

"Daring and disturbing, OUT is prepared to push the limits of this world - not only in violence and sex but also in human outlook... Remarkable" * Los Angeles Times *
"OUT is a potent cocktail of urban blight, perverse feminism and vigilante justice" * New York Times Book Review *
"A shockingly intense read" * Daily Telegraph *
"Brings the mystery thriller to new levels of intensity and realism - OUT has great plot twists, vigour and an ending that would make Hannibal Lecter smile" * Library Journal *
"In this top-drawer page-turner, Kirino offers a clever snapshot of her own culture...slyly amusing and compulsive" * Metro *

Natsuo Kirino, born in 1951, quickly established a reputation in Japan as one of a rare breed of crime writer whose work goes well beyond the conventional crime novel. This fact has been demonstrated by her winning not only Japan's top mystery award, for Out, but one of its major literary awards, the Naoki Prize, for Soft Cheeks, followed by the Tanizaki Prize for Tokyo Island. Several of her books have also been turned into movies.

GOR000993820
Out by Natsuo Kirino
Natsuo Kirino
Used - Very Good
Paperback
Vintage Publishing
2004-09-02
528
0099472287
9780099472285
N/A
Book picture is for illustrative purposes only, actual binding, cover or edition may vary.
This is a used book - there is no escaping the fact it has been read by someone else and it will show signs of wear and previous use. Overall we expect it to be in very good condition, but if you are not entirely satisfied please get in touch with us.