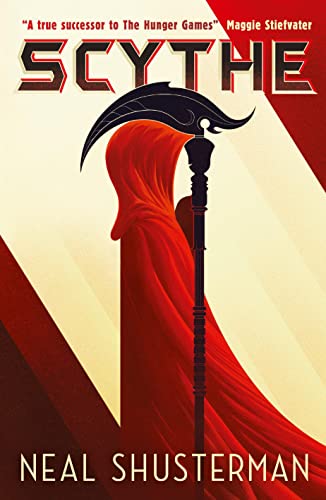 "A true successor to The Hunger Games." Maggie Stiefvater

In a perfect world, what is there left to fear? A chilling and thought-provoking sci-fi novel from New York Times bestselling author Neal Shusterman.

A dark, gripping and witty thriller in which the only thing humanity has control over is death.

In a world where disease, war and crime have been eliminated, the only way to die is to be randomly killed ("gleaned") by professional scythes. Citra and Rowan are teenagers who have been selected to be scythes' apprentices, and despite wanting nothing to do with the vocation, they must learn the art of killing and understand the necessity of what they do.

Only one of them will be chosen as a scythe's apprentice and as Citra and Rowan come up against a terrifyingly corrupt Scythedom, it becomes clear that the winning apprentice's first task will be to glean the loser.

This powerful tale is guaranteed to make readers think deeply. * Publishers Weekly (starred review) *
This first volume in an anticipated trilogy offers forbidden love, mass murders, cool philosophical musings, and a well-developed futuristic society-plenty to guarantee interest in the planned two followups. * BCCB (starred review) *
Shusterman starts off this series in dramatic fashion as he creates an engrossing world that pulls readers in and refuses to let them go... A truly astounding, unputdownable read and a fast-paced beginning to an excellent sci-fi series. A must-have. * School Library Journal (starred review) *
Elegant and elegiac, brooding but imbued with gallows humor, Shusterman's dark tale thrusts realistic, likeable teens into a surreal situation and raises deep philosophic questions. A thoughtful and thrilling story of life, death, and meaning. * Kirkus (starred review) *
Scythe owes an obvious debt to Unwind (2007) and its sequels, and this succeeds as a sort of shadow companion to Patrick Ness' Chaos Walking trilogy: instead of exploring the ways in which men are monsters, this deals in what happens to men when there are no monsters. When our reach does not exceed our grasp, when comfort is more easily obtained than struggle, when our essential humanity doesn't burn out but becomes slowly irrelevant, what becomes of us? Readers will find many things in these pages. Answers to such unsettling questions will not be among them. * Booklist (starred review) *

Neal Shusterman is an award-winning author whose books include the New York Times bestselling Unwind series and Challenger Deep, which won a National Book Award. He also writes screenplays for film and television, for shows such as Goosebumps and Animorphs. He lives in Southern California with his four children. Follow him on Twitter: @NealShusterman

GOR008845760
Scythe by Neal Shusterman
Neal Shusterman
Arc of a Scythe
Used - Very Good
Paperback
Walker Books Ltd
2018-02-01
448
1406379247
9781406379242
N/A
Book picture is for illustrative purposes only, actual binding, cover or edition may vary.
This is a used book - there is no escaping the fact it has been read by someone else and it will show signs of wear and previous use. Overall we expect it to be in very good condition, but if you are not entirely satisfied please get in touch with us.