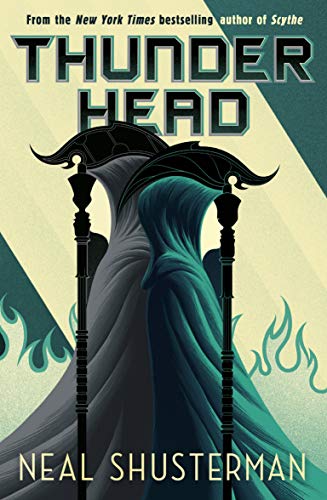 The dark and thrilling sequel to Scythe, the New York Times sci-fi bestseller.

The stakes are high in this chilling sci-fi thriller, in which professional scythes control who dies. Everything else is out of human control, managed by the Thunderhead. It's a perfect system - until it isn't.

It's been a year since Rowan went off-grid. Hunted by the Scythedom, he has become an urban legend, a vigilante snuffing out corrupt scythes in a trial by fire. Citra, meanwhile, is forging her path as Scythe Anastasia, gleaning with compassion. However, conflict within the Scythedom is growing by the day, and when Citra's life is threatened, it becomes clear that there is a truly terrifying plot afoot.

The Thunderhead observes everything, and it does not like what it sees. Will it intervene?

Or will it simply watch as this perfect world begins to unravel?

Shusterman cranks up the stakes in this blistering sequel [...] Interweaving heady questions of morality, responsibility, loyalty, and power, Shusterman builds to a devastatingly intense conclusion that sends the characters and larger world into terrifying new territory. * Publishers Weekly, starred review *
This sequel digs deeper into Shusterman's complex world and complicated characters, offering political maneuvering, fatal conspiracies, and impending catastrophe via a slowly unfurling plot and startling bursts of action. Fear the reaper(s)...but relish this intelligent and entertaining blend of dark humor and high death tolls. * Kirkus Reviews, starred review *
Shusterman follows up his Printz Honor Book Scythe (2016) with that most difficult of feats: a sequel that surpasses its predecessor... There's no doubting Shusterman's talents-he's nabbed both a National Book Award and a Printz Honor Book-and this sequel to an enthusiastically received series starter is eagerly awaited. * Booklist, starred review *
Shusterman wields his magic once again in this continuation. The exploration of how the Thunderhead operates and thinks, told through "diary entries," gives the story an extra dimension: how would an all-knowing, all-powerful AI think, and how would it process a flawed humanity? The climax and twist ending will leave fans of the series begging for the next installment. VERDICT A rare sequel that is even better than the first book. * School Library Journal, starred review *
"[...] supernatural gets serious" * The Jewish Chronicle *

Neal Shusterman is an award-winning author whose books include the New York Times bestselling Unwind series and Challenger Deep, which won a National Book Award. He also writes screenplays for film and television, for shows such as Goosebumps and Animorphs. He lives in Southern California with his four children. Follow him on Twitter: @NealShusterman

GOR009837403
Thunderhead by Neal Shusterman
Neal Shusterman
Arc of a Scythe
Used - Like New
Paperback
Walker Books Ltd
2018-05-03
528
1406379530
9781406379532
N/A
Book picture is for illustrative purposes only, actual binding, cover or edition may vary.
The book has been read, but looks new. The book cover has no visible wear, and the dust jacket is included if applicable. No missing or damaged pages, no tears, possible very minimal creasing, no underlining or highlighting of text, and no writing in the margins.