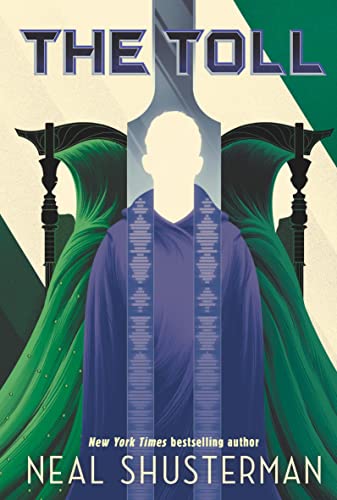 The Toll
by Neal Shusterman

The Toll by Neal Shusterman

The explosive conclusion to the New York Times bestselling Arc of a Scythe series.

It's been three years since Rowan and Citra disappeared; since Scythe Goddard came into power; since the Thunderhead closed itself off to everyone but Grayson Tolliver.

In this pulse-pounding finale to Neal Shusterman's internationally bestselling trilogy, constitutions are tested and old friends are brought back from the dead.

The author, Neal Shusterman, is a genius in how he weaves each of the characters, old and new, having their paths cross until they finally intertwine. You almost feel like you're watching a puzzle being completed. So wonderfully done, he truly is a master with his writing. This has been an incredible series, any dystopian fan will enjoy the unique concept of this trilogy. * ReadingZone *

Neal Shusterman is an award-winning author whose books include the Arc of a Scythe series (Scythe, Thunderhead and The Toll), the New York Times bestselling Unwind series and Challenger Deep, which won a National Book Award. He also writes screenplays for film and television, for shows such as Goosebumps and Animorphs. He lives in Southern California with his four children. Follow him on Twitter: @NealShusterman

GOR010173616
The Toll by Neal Shusterman
Neal Shusterman
Arc of a Scythe
Used - Very Good
Paperback
Walker Books Ltd
2019-11-05
640
1406385670
9781406385670
N/A
Book picture is for illustrative purposes only, actual binding, cover or edition may vary.
This is a used book - there is no escaping the fact it has been read by someone else and it will show signs of wear and previous use. Overall we expect it to be in very good condition, but if you are not entirely satisfied please get in touch with us.