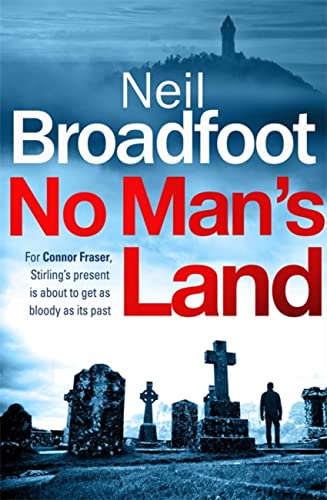 No Man's Land by Neil Broadfoot

No Man's Land by Neil Broadfoot

'An atmospheric, twisty and explosive start to a new series by one of the masters of Scottish fiction' Angela Clarke, Sunday Times Bestseller

War is coming to No-Man's Land, and Connor Fraser will be ready.

A mutilated body is found dumped at Cowane's Hospital in the heart of historic Stirling. For DCI Malcolm Ford it's like nothing he's every seen before, the savagery of the crime making him want to catch the murderer before he strikes again. For reporter Donna Blake it's a shot at the big time, a chance to get her career back on track and prove all the doubters wrong. But for close protection specialist Connor Fraser it's merely a grisly distraction from the day job.

But then a bloodied and broken corpse is found, this time in the shadow of the Wallace Monument - and with it, a message. One Connor has received before, during his time as a police officer in Belfast.

With Ford facing mounting political and public pressure to make an arrest and quell fears the murders are somehow connected to heightened post-Brexit tensions, Connor is drawn into a race against time to stop another murder. But to do so, he must question old loyalties, confront his past and unravel a mystery that some would sacrifice anything - and anyone - to protect.

'Broadfoot is here, and he's ready to sit at the table with some of the finest crime writers Scottish fiction has to offer' Russel D. McLean

'Crisp dialogue, characters you believe and a prose style that brings you back for more . . . a fine addition to a growing roster of noir titles with a tartan tinge' Douglas Skelton

'Definitely a must read for all lovers of Tartan Noir: or anyone else who simply wants to enjoy a compelling tale' Undiscovered Scotland

This is Broadfoot's best to date, a thriller that delivers the thrills: energetic, breathlessly pacey and keeping you guessing till the end -- Craig Russell
Great set of characters, wonderfully grisly and grim, and a cracking pace. Top stuff! -- James Oswald
A deliciously twisty thriller that never lets up the pace. Thrills, spills, chills and kills -- Donna Moore
A frantic, pacy read with a compelling hero -- Steve Cavanagh
An author on the top of his game * Crime Fiction Lover *
Broadfoot is here, and he's ready to sit at the table with some of the finest crime writers Scottish fictions has to offer -- Russel D. McLean
Broadfoot is the real deal. A superb debut -- Michael J. Malone on Falling Fast * Crimesquad.com *
Cracking pace, satisfyingly twisty plot. A great read -- James Oswald on The Storm
Crisp dialogue, characters you believe and a prose style that brings you back for more . . . a fine addition to a growing roster of noir titles with a tartan tinge -- Douglas Skelton
Definitely a must read for all lovers of Tartan Noir: or anyone else who simply wants to enjoy a compelling tale * Undiscovered Scotland *
Gripping action [...] menacing undercurrents [...] The chapters are a series of stabs, swift, to the point. The knots in the plot unravel with timely stealth -- Tom Adair * The Scotsman *
Gritty [with] a strong identity; very tartan noir crime fiction. The shock opening hooked me in and the well-developed characters, back stories, plot and sub-plots kept that interest going -- Dundee Book Prize judge
Neil Broadfoot is one to watch -- Magnus Linklater * The Scotsman *
It's a thrill a minute in No Man's Land, a high-octane thriller introducing us to close protection specialist, Connor Fraser -- Nick Quantrill
Neil Broadfoot hits the ground running and doesn't stop. With the very beating heart of Scotland at its core, your heart too will race as you reach the jaw dropping conclusion of this brilliant thriller. First class! -- Denzil Meyrick

Neil Broadfoot worked as a journalist for 15 years at both national and local newspapers, including The Scotsman, Scotland on Sunday and the Evening News, covering some of the biggest stories of the day. A poacher turned gamekeeper, he has since moved into communications: providing media relations advice for a variety of organisations, from emergency services to government and private clients in the City.

Neil is married to Fiona and a father to two girls, meaning he's completely outnumbered in his own home. He lives in Dunfermline, the setting for his first job as a local reporter.

GOR009727219
9781472127587
1472127587
No Man's Land by Neil Broadfoot
Neil Broadfoot
Used - Very Good
Paperback
Little, Brown Book Group
2019-04-11
320
N/A
Book picture is for illustrative purposes only, actual binding, cover or edition may vary.
This is a used book - there is no escaping the fact it has been read by someone else and it will show signs of wear and previous use. Overall we expect it to be in very good condition, but if you are not entirely satisfied please get in touch with us
Trustpilot