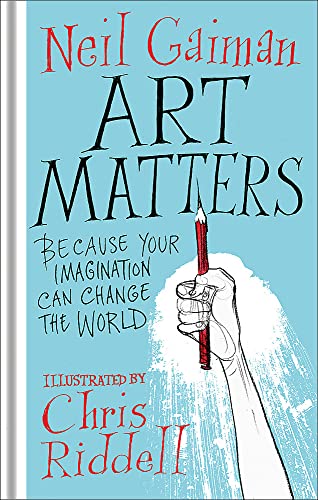 In Stock
$18.49
inc. GST
A creative call to arms from the mind of Neil Gaiman, combining his extraordinary words with striking illustrations by Chris Riddell.
Very Good Well Read
5 in stock

A creative call to arms from the mind of Neil Gaiman, combining his extraordinary words with deft and striking illustrations by Chris Riddell. Art Matters will inspire its readers to seize the day in the name of art.

'Like a bedtime story for the rest of your life, this is a book to live by. At its core, it's about freeing ideas, shedding fear of failure, and learning that "things can be different". ' - Institute of Imagination

Be bold. Be rebellious. Choose art. It matters.

Neil Gaiman once said that 'the world always seems brighter when you've just made something that wasn't there before'. This little book is the embodiment of that vision. Drawn together from speeches, poems and creative manifestos, Art Matters explores how reading, imagining and creating can change the world, and will be inspirational to young and old.

What readers are saying about ART MATTERS

'A rallying cry for all artists and creators'

'Just the injection of positive thinking I needed'

'What a gorgeous, sweet and very, very wise little book'

'You don't know it yet, but it's likely you need this book'

'I feel artistically charged up for the first time in ages'

Neil Gaiman was born to write. I cannot imagine that a day goes by without his putting one word after another in the service of telling a story, communicating an idea, sparking a new thought in a happy readerNeil Gaiman shows that while we might come to his writing for gods and monsters, actually all human life is here - Independent on THE VIEW FROM THE CHEAP SEATSChris Riddell is an amazing artist

GOR009397235
Art Matters by Neil Gaiman
Neil Gaiman
Used - Very Good
Hardback
Headline Publishing Group
2018-09-06
112
1472260082
9781472260086
N/A
Book picture is for illustrative purposes only, actual binding, cover or edition may vary.
This is a used book - there is no escaping the fact it has been read by someone else and it will show signs of wear and previous use. Overall we expect it to be in very good condition, but if you are not entirely satisfied please get in touch with us.