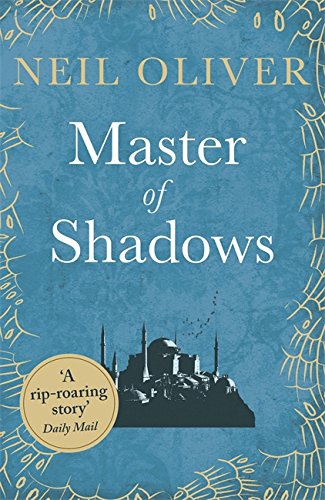 Master of Shadows
by Neil Oliver

Used Price
$15.49
inc. GST
Free Shipping in Australia
From the lawless borderlands of Scotland to the crumbling majesty of Constantinople, the first novel from TV historian Neil Oliver is a sweeping, epic adventure and the story of a man all but forgotten by history.
Very Good Good

Master of Shadows by Neil Oliver

In fifteenth-century Constantinople, Prince Constantine saves the life of a broken-hearted girl. But the price of his valour is high.

John Grant is a young man on the edge of the world. His unique abilities carry him from his home in Scotland to the heart of the Byzantine Empire in search of a girl and the chance to fulfil a death-bed promise.

Lena has remained hidden from the men who have been searching for her for many years. When she's hunted down, at last she knows what she must do.

With an army amassing beyond the city's ancient walls, the fates of these three will intertwine. As the Siege of Constantinople reaches its climax, each must make a choice between head and heart, duty and destiny.

'Impeccably researched - of course! - and deeply enjoyable. Goes down in a big, delicious gulp of action and mystery, with a taste of romance' -- Diana Gabaldon
A rip-roaring story . . . a full-blown, swaggering epic with a hint of magical realism and a plot with plenty of twists and intrigue * DAILY MAIL *
'Ambition on an historic scale' * HERALD *
A colourful, highly enjoyable tale of very different lives united by the unanticipated twists and turns of fate * BBC HISTORY *
A rich narrative and scintillating storyline inspired by real historical characters * SCOTTISH FIELD *
This is an impressive debut novel... I would definitely recommend this book to anyone that enjoys Fiction and History genres * THE QUIET KNITTER *

Neil Oliver is a Scottish archaeologist, historian, broadcaster and writer who has become widely known as the presenter of BBC's flagship series A History of Scotland. Before that, his distinctive style was much in evidence as the charismatic presenter of the award-winning multi-part documentary series Coast and the author of its tie-in book. His archaeological training at Glasgow University was put to good use in BBC2's series Two Men in a Trench where he visited historic British battlefields and attempted to recreate the events of each battle. He co-wrote the two accompanying books. He has also presented the BBC series A History of Ancient Britain, Vikings, The Last Explorers and Sacred Wonders of Britain, as well as Coast Australia. He lives in Stirling with his wife and three children. Find out more at www.neiloliver.com or follow him on Twitter @NEIL_OLIVER_

GOR007620634
Master of Shadows by Neil Oliver
Neil Oliver
Used - Very Good
Paperback
Orion Publishing Co
2016-07-14
512
1409158136
9781409158134
N/A
Book picture is for illustrative purposes only, actual binding, cover or edition may vary.
This is a used book - there is no escaping the fact it has been read by someone else and it will show signs of wear and previous use. Overall we expect it to be in very good condition, but if you are not entirely satisfied please get in touch with us.