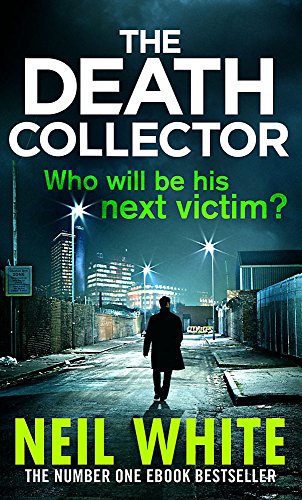 The Death Collector
by Neil White

The Death Collector by Neil White

Joe Parker is Manchester's top criminal defence lawyer and Sam Parker - his brother - is a brilliant detective with the Greater Manchester Police force. Together they must solve a puzzling case that is chilling Manchester to the bone...

The Death Collector is charming, sophisticated and intelligent, but he likes to dominate women, to make them give themselves to him completely; to surrender their dignity and their lives. He's a collector of beautiful things, so once he traps them he'll never let them go.

Joe is drawn into the Death Collector's world and when the case becomes dangerous, Sam is the first person he turns to. In this gripping thriller, danger lurks for not only the Parker brothers, but also those closest to them.

Down and dirty authenticity reeks from every page - the smell of the cells, the artificiality of court appearances, the intensity of the investigation - all helping to make this hypnotic, troubling crime writing with a superb villain and a distinctive atmosphere. * Daily Mail on Next to Die *
Excellent writing and a voice of authority, Neil White snares you with his neat plots and real but likeable characters. Top notch thrills from a master of his craft. * Paul Finch, author of Stalkers *
Pacey and packed with atmosphere thanks to author Neil White's day job as a practicing criminal lawyer. * Irish Independent *
Neil White has hit on a winning formula with his informed and entertaining blend of the legal and police thrillers. The Death Collector is assured, cleverly layered and builds to a thrilling and atmospheric climax. * Chris Ewan, author of Safe House *
Compulsive but disturbing...it's the first in a new series and we can't wait for the next instalment. * Bella magazine on Next to Die *
[The] storylines run alongside each other before coming together in an adrenaline-fuelled climax on the desolate Lancashire moors made infamous by real-life murderers Ian Brady and Myra Hindley...Neil White reliably delivers a solid mix of police procedural and legal thriller, and while he continues to write even relatively minor characters with such flair, then he won't go far wrong. * Crimereview.co.uk *

Neil White was born and brought up around West Yorkshire. He left school at sixteen but studied for a law degree in his twenties, then started writing in 1994. He is now a lawyer by day, crime fiction writer by night. He lives with his wife and three children in Preston.

GOR006748097
The Death Collector by Neil White
Neil White
Used - Very Good
Paperback
Little, Brown Book Group
2015-07-16
432
0751549495
9780751549492
N/A
Book picture is for illustrative purposes only, actual binding, cover or edition may vary.
This is a used book - there is no escaping the fact it has been read by someone else and it will show signs of wear and previous use. Overall we expect it to be in very good condition, but if you are not entirely satisfied please get in touch with us.