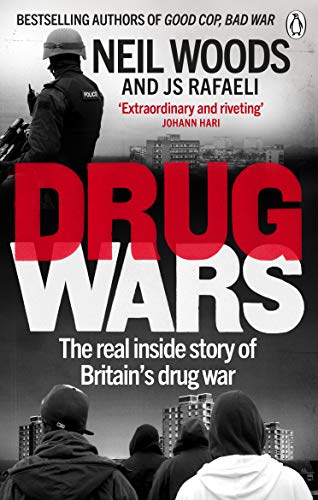 TO KNOW THE TRUE STORY BEHIND A WAR, ASK THE PEOPLE WHO FOUGHT IT

'An observation van is running surveillance on a high-level Bradford gangster.

Drug Wars: The terrifying inside story of Britain's drug trade by Neil Woods

TO KNOW THE TRUE STORY BEHIND A WAR, ASK THE PEOPLE WHO FOUGHT IT

'An observation van is running surveillance on a high-level Bradford gangster. Suddenly the van is surrounded by men in balaclavas and tied shut. Out comes the can of petrol. It is set alight and the two cops inside barely escape with their lives. This incident is never reported. The gangsters clearly have informants inside the police and alerting the public would undermine the force. Everyone shrugs it off - with so much money in the drugs game, corruption is part and parcel of the whole deal'

The Drug Wars have been fought on British streets for decades, bringing destruction, corruption and violence in their wake. Yet it is a story that remains fundamentally untold. Until now.

In this groundbreaking book, former undercover police officer Neil Woods, who risked his life infiltrating some of the UK's most vicious gangs, pieces together the complex and terrifying reality of the drug war in Britain. Calling upon gripping first-hand accounts from those on both sides of the battle, Drug Wars is told by those who are fighting it.

Anyone who cares about Britain should read this extraordinary and riveting book. It will change how you see our country - and lots of things that seemed strange will start to make sense. -- Johann Hari
If you want to understand how Britain succumbed to a self-defeating war on drugs benefiting only the most vicious gangsters, this book is the perfect primer with its highly-readable fusion of analysis, history and first person testimonies from the front line. -- Ian Birrell

Neil Woods (Author)
Neil Woods spent fourteen years (1993-2007) infiltrating drug gangs as an undercover police officer - befriending and gaining the trust of some of the most violent, unpredictable criminals in Britain. With the insight that can only come from having fought on its front lines, Neil came to see the true futility of the War on Drugs - that it demonises those who need help, and only empowers the very worst elements in society. Neil is on the board of LEAP (Law Enforcement Action Partnership) in the US and is the Chair of LEAP in the UK. LEAP is an organisation made up exclusively of law enforcement professionals, past and present, who campaign for drug law reforms. He has also starred in Channel 4 Drugs Live.

J S Rafaeli (Author)
J S Rafaeli is a writer and musician based in London. He is the author of 'Live at the Brixton Academy', and a frequent contributor to Vice

GOR009672416
9781785037467
1785037463
Drug Wars: The terrifying inside story of Britain's drug trade by Neil Woods
Neil Woods
Used - Very Good
Paperback
Ebury Publishing
2019-02-21
336
N/A
Book picture is for illustrative purposes only, actual binding, cover or edition may vary.
This is a used book - there is no escaping the fact it has been read by someone else and it will show signs of wear and previous use. Overall we expect it to be in very good condition, but if you are not entirely satisfied please get in touch with us
Trustpilot