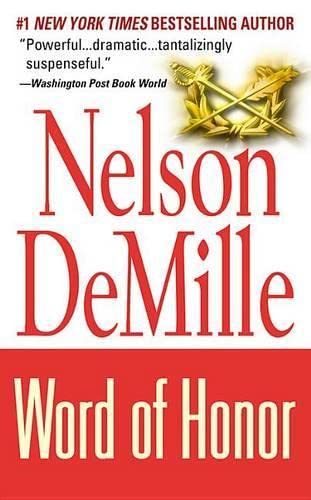 Word of Honor
by Nelson DeMille

Out of Stock
$17.49
inc. GST
In 1968, Ben Tyson was a lieutenant in Vietnam. There, the men under his command committed a murderous atrocity. Now Tyson is being held responsible. And only one woman can reveal the truth of his past--and set him free. DeMille is the author of By the Rivers of Babylon.
Very Good
Only 0 left

Word of Honor by Nelson DeMille

Read the gripping story of a Vietnam vet whose secret past threatens his family, career, and honor, from the #1 New York Times bestselling author whose books have sold over 50 million copies worldwide, and is "a true master" (Dan Brown).

He is a good man, a brilliant corporate executive, an honest, handsome family man admired by men and desired by women. But sixteen years ago Ben Tyson was a lieutenant in Vietnam.

There, in 1968, the men under his command committed a murderous atrocity-and together swore never to tell the world what they had done. Not the press, army justice, and the events he tried to forget have caught up with Ben Tyson. His family, his career, and his personal sense of honor hang in the balance. And only one woman can reveal the truth of his past--and set him free.

Nelson DeMille is a former U.S. Army lieutenant who served in Vietnam and is the author of nineteen acclaimed novels, including the #1 New York Times bestsellers Night Fall, Plum Island, The Gate House, The Lion, The Panther and Radiant Angel. His other New York Times bestsellers include The Charm School, Word of Honor, The Gold Coast, Spencerville, The Lion's Game, Up Country, Wild Fire, and The General's Daughter, the last of which was a major motion picture. For more information, you can visit NelsonDeMille.net.

GOR001837522
Word of Honor by Nelson DeMille
Nelson DeMille
Used - Very Good
Paperback
Little, Brown & Company
1987-03-01
752
0446301582
9780446301589
N/A
Book picture is for illustrative purposes only, actual binding, cover or edition may vary.
This is a used book - there is no escaping the fact it has been read by someone else and it will show signs of wear and previous use. Overall we expect it to be in very good condition, but if you are not entirely satisfied please get in touch with us.