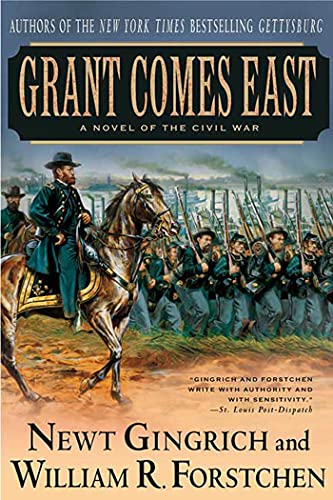 In Stock
$13.99
+10% GST
The forces of General Robert E. Lee march to Washington, DC, to launch an assault against one of the largest fortifications in the world. He must also overcome the defiant stand of President Abraham Lincoln. Lincoln has appointed General Ulysses S Grant as commander of all Union forces. Grant races east to confront Lee.
Very Good
5 in stock

As "Grant Comes East" opens, the forces of General Robert E. Lee march to Washington, D.C., to launch an assault against one of the largest fortifications in the world. Lee knows that a frontal assault against such fortifications could devastate his army, but it is a price he fears must be paid for final victory. Beyond a military victory in the field, Lee must also overcome the defiant stand of President Abraham Lincoln, who vows that regardless of the defeat at Gettysburg, his solemn pledge to preserve the Union will be honoured. Lincoln will mobilize the garrison of Washington to hold on no matter what the costs. At the same time, Lincoln has appointed General Ulysses S. Grant as commander of all Union forces. Grant, fresh from his triumph at Vicksburg, races east, bringing with him his hardened veterans from Mississippi to confront Lee.

"Ulysses S. Grant is one of my Civil War favorites. I sat down on a weekend morning to read this book and, by night, I was still at it to the last page. Couldn't put it down. This is a very readable story of how President Abraham Lincoln finally put Grant in charge and changed the course of history." --Liz Smith

"Gingrich and Forstchen have produced a very readable entry into the literature of speculative history. It will be interesting, perhaps even thrilling, to see how the military strategy and political maneuvering plays out in the next installment." --Civil War Book Review

"With each book in their ongoing alternate history cycle, Gingrich and Forstchen have gone from strength to strength as storytellers. Unabashedly, this is a work of popular historical fiction; it aspires to entertain, first and foremost, but it has passages of genuine depth and poetry which elevate it above many other specimens of its peculiar sub-genre." --William Trotter, The Charlotte Observer

"Gingrich and Forstchen portray icons like Grant and Lee as very real humans, beset with very real problems demanding decisions... This second volume is every bit as good as the first." --St. Louis Post-Dispatch

"An exciting alternative history of the Civil War. Character depictions are vivid, detailed, and insightful. One of the best novels of the Civil War to appear in recent years." --Publishers Weekly (starred)

"A good yarn. The authors provide apt historically plausible detail to give substance to the premise. Colorful and imaginative historical fiction." --Washington Times

"What the authors come up with is as rivetingly plausible as what they devised in the previous novel. Notably original." --Booklist

"The Gingrich and Forstchen 'what-if' take on the Civil War gathers some steam. The battle scenes continue war-lovingly rendered." --Kirkus

NEWT GINGRICH, front-running Republican primary candidate for the 2012 Presidential Election, former Speaker of the House, bestselling author of Gettysburg and Pearl Harbor, the longest serving teacher of the Joint War Fighting Course for Major Generals at Air University, and an honorary Distinguished Visiting Scholar and Professor at the National Defense University. He resides in Virginia with his wife, Callista, with whom he hosts and produces documentaries, including "A City Upon A Hill."

Dr. William R. Forstchen is the author of more than thirty books, including historical fiction, science fiction, young adult novels, and traditional historical research. He holds a Ph.D. with a specialization in military history from Purdue University and is an associate professor of history at Montreat College in North Carolina. Forstchen's doctoral dissertation was a first-of-its-kind study about the mobilization, deployment, and combat experiences of an African-American regiment from the Midwest during the Civil War.

GOR001943376
Grant Comes East by Newt Gingrich
Newt Gingrich
Used - Very Good
Paperback
Griffin Publishing
2005-05-27
400
0312309384
9780312309381
N/A
Book picture is for illustrative purposes only, actual binding, cover or edition may vary.
This is a used book - there is no escaping the fact it has been read by someone else and it will show signs of wear and previous use. Overall we expect it to be in very good condition, but if you are not entirely satisfied please get in touch with us.