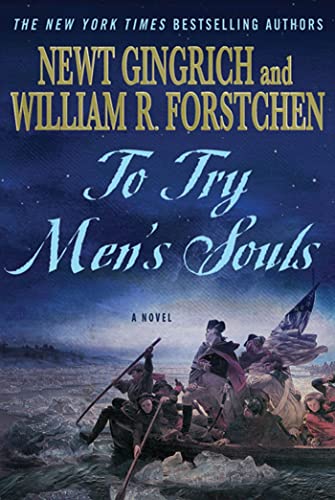 After two bestselling historical series, Newt Gingrich and William R. Forstchen have turned their sharp eye for detail on the Revolutionary War. Their story follows three men with three very different roles to play in history: General George Washington, Thomas Paine, and Jonathan Van Dorn, a private in Washington's army. Washington is full of doubt on the night of December 25, 1776. The revolution has come down to one desperate throw of the dice as his army, freezing and hungry, slips across the Delaware to carry out what will become one of the most famous surprise attacks of all time. While Washington prepares his weary troops, Thomas Paine is in Philadelphia, overseeing the printing of The Crisis. Having seen first hand the state of the Continental Army, Paine captures the grim reality in one line: 'These are the times that try men's souls'. Now Private Jonathan Van Dorn is about to bring the war to his own doorstep. In the heat of battle, Jonathan must decide between staying loyal to the cause and sparing his brother who has joined up with the British. Through the thoughts and private fears of these three men, Gingrich and Forstchen illuminate the darkest days of the Revolution. With detailed research and an incredible depth of military insight, this novel provides a rare and personal perspective of the men who fought for, and founded, the United States of America.

"Surely to become another popular book for Gingrich and Forstchen." --Publishers Weekly

NEWT GINGRICH, front-running Republican primary candidate for the 2012 Presidential Election, former Speaker of the House, bestselling author of Gettysburg and Pearl Harbor, the longest serving teacher of the Joint War Fighting Course for Major Generals at Air University, and an honorary Distinguished Visiting Scholar and Professor at the National Defense University. He resides in Virginia with his wife, Callista, with whom he hosts and produces documentaries, including their latest, "A City Upon A Hill."

WILLIAM R. FORSTCHEN, Ph.D., is a Faculty Fellow at Montreat College in Montreat, North Carolina. He received his doctorate from Purdue University and is the author of more than forty books. He is the New York Times best selling author of One Second After, published by Tor/Forge of St. Martin's Press. He resides near Asheville, North Carolina, with his daughter, Meghan.

GOR003585491
To Try Men's Souls by Newt Gingrich
Newt Gingrich
Used - Very Good
Paperback
Griffin Publishing
2010-10-04
368
0312592876
9780312592875
N/A
Book picture is for illustrative purposes only, actual binding, cover or edition may vary.
This is a used book - there is no escaping the fact it has been read by someone else and it will show signs of wear and previous use. Overall we expect it to be in very good condition, but if you are not entirely satisfied please get in touch with us.