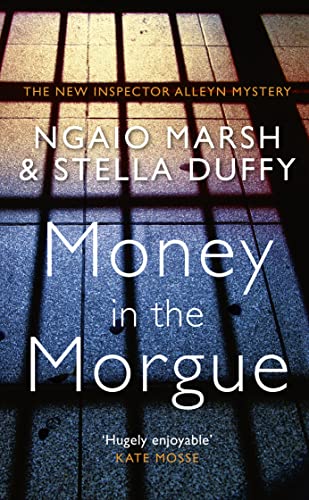 Money in the Morgue by Ngaio Marsh

Roderick Alleyn is back in this unique crime novel begun by Ngaio Marsh during the Second World War and now completed by Stella Duffy in a way that has delighted reviewers and critics alike.

Money in the Morgue: The New Inspector Alleyn Mystery by Ngaio Marsh

Roderick Alleyn is back in this unique crime novel begun by Ngaio Marsh during the Second World War and now completed by Stella Duffy in a way that has delighted reviewers and critics alike.

It's business as usual for Mr Glossop as he does his regular round delivering wages to government buildings scattered across New Zealand's lonely Canterbury plains. But when his car breaks down he is stranded for the night at the isolated Mount Seager Hospital, with the telephone lines down, a storm on its way and the nearby river about to burst its banks.

Trapped with him at Mount Seager are a group of quarantined soldiers with a serious case of cabin fever, three young employees embroiled in a tense love triangle, a dying elderly man, an elusive patient whose origins remain a mystery ... and a potential killer.

When the payroll disappears from a locked safe and the hospital's death toll starts to rise faster than normal, can the appearance of an English detective working in counterespionage be just a lucky coincidence - or is something more sinister afoot?

'Stella Duffy performs a remarkable act of ventriloquism with New Zealand's Queen of Crime. I defy readers to see the join' VAL McDERMID

`A proper Golden Age set up of suspects and plot, a wonderful sense of place and period, and a real frisson of being with Alleyn himself! I can't imagine anyone doing it better - Stella Duffy is the natural successor to Dame Ngaio' KATE MOSSE

`Ngaio Marsh fans rejoice! After 35 years Alleyn is back in a new mystery - and both are as good as ever' JOHN CURRAN

`Fans all over the world will, I'm sure, hope that there are more stories to come.' SOPHIE HANNAH, THE GUARDIAN

`A more appropriate `completist' author could hardly have been wished for' MIKE RIPLEY, SHOTS Magazine

`One of the most successful resurrections of another author's character I've come across.' DAILY TELEGRAPH

`Clever stuff. Ngaio Marsh would give it nine out of ten' DAILY MAIL

`A complicated tale, so well completed by Stella Duffy that I was quite unable to see the join' LITERARY REVIEW

"Though tart noir specialist Duffy might seem an unlikely choice to flesh out the skeleton Marsh left behind, fans will be hard-pressed to find the joint between the two writers." KIRKUS REVIEW

"An extraordinary literary tag-team completed 75 years after it began." THE LISTENER (NZ)

Dame Ngaio Marsh was born in New Zealand in 1895. Along with Agatha Christie, Margery Allingham and Dorothy Sayers she was admired as one of the original `Queens of Crime', best known for her 32 crime novels featuring Detective Roderick Alleyn, published between 1934 and 1982, the year she died. In 1949 she had one million copies published on a single day (the 'Marsh Million'), a distinction she shared only with George Bernard Shaw, H.G. Wells and Agatha Christie. Many of her stories have theatrical settings, reflecting Ngaio Marsh's real passion, and as both actress and producer she almost single-handedly revived the New Zealand public's interest in the theatre. It was for this work that the received what she called her `damery' in 1966.

Stella Duffy is an acclaimed novelist and theatremaker who has twice won a prestigious CWA Dagger for her short stories, she won Stonewall Writer of the Year twice and the inaugural Diva Literary Prize for Fiction in 2017. Born in London, she spent her childhood in New Zealand, has written 16 novels, and is the co-director of the Fun Palaces campaign for greater access to culture for all, and was awarded an OBE for services to the Arts in 2016. Her website is www.stelladuffy.wordpress.com

GOR009077331
9780008207106
0008207100
Money in the Morgue: The New Inspector Alleyn Mystery by Ngaio Marsh
Ngaio Marsh
Used - Like New
Hardback
HarperCollins Publishers
2018-03-08
336
N/A
Book picture is for illustrative purposes only, actual binding, cover or edition may vary.
The book has been read, but looks new. The book cover has no visible wear, and the dust jacket is included if applicable. No missing or damaged pages, no tears, possible very minimal creasing, no underlining or highlighting of text, and no writing in the margins
Trustpilot