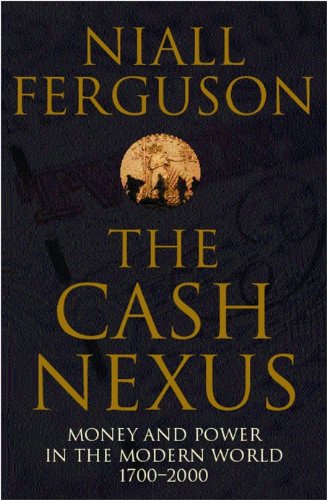 The Cash Nexus
by Niall Ferguson

In Stock
$11.99
+10% GST
Shows that a nation's success largely depends on the way it manages its money. But where do money and politics meet? From 1700 to the present day, the author offers an analysis of the evolution of today's economic and political landscape.
Very Good Good
Only 4 left

The Cash Nexus: Money and Politics in Modern History, 1700-2000 by Niall Ferguson

Modern history shows that a nation's success largely depends on the way it manages its money. But where do money and politics meet? From 1700 to the present day, Niall Ferguson offers a bold and original analysis of the evolution of today's economic and political landscape. Far from being driven by the profit motive alone, our recent history, as Ferguson makes brilliantly clear, has also been made by potent and often conflicting human impulses - sex, violence and the desire for power.

In this dazzling, powerful and controversial explanation of modern world history and the fundamental force that lurks behind it all, Niall Ferguson answers the big questions about finance and its crucial place in bringing happiness and despair, warfare and welfare, boom and crash to nations buffeted by the onward march of history.

'A marvellous combination of persuasion and provocation ... The Cash Nexus has enough ideas for a dozen books' Martin Daunton, History Today

'Ferguson is one of the most technically accomplished historians writing today ... The Cash Nexus offers an important corrective to the naive story of economic growth' Robert Skidelsky, New York Review of Books

Niall Ferguson is one of Britain's most renowned historians. He is the Milbank Family Senior Fellow at the Hoover Institution, Stanford University, a senior faculty fellow of the Belfer Center for Science and International Affairs at Harvard, and a visiting professor at Tsinghua University, Beijing. He is the author of fifteen books, including The Pity of War, The House of Rothschild, Empire, Civilization and Kissinger, 1923-1968: The Idealist, which won the Council on Foreign Relations Arthur Ross Prize. He is an award-making filmmaker, too, having won an international Emmy for his PBS series The Ascent of Money. His many other prizes include the Benjamin Franklin Prize for Public Service (2010), the Hayek Prize for Lifetime Achievement (2012) and the Ludwig Erhard Prize for Economic Journalism (2013). He writes a weekly column for the Sunday Times, for which he was named Columnist of the Year at the 2018 British Press Awards.

GOR001643795
The Cash Nexus: Money and Politics in Modern History, 1700-2000 by Niall Ferguson
Niall Ferguson
Used - Very Good
Paperback
Penguin Books Ltd
2002-04-04
576
0140293337
9780140293333
N/A
Book picture is for illustrative purposes only, actual binding, cover or edition may vary.
This is a used book - there is no escaping the fact it has been read by someone else and it will show signs of wear and previous use. Overall we expect it to be in very good condition, but if you are not entirely satisfied please get in touch with us.