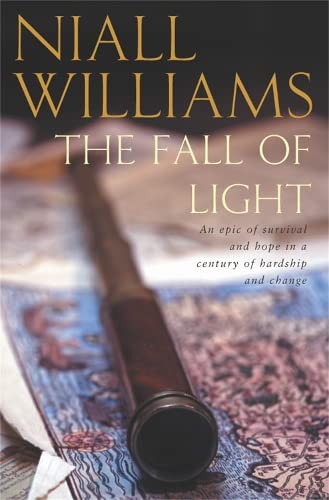 The Fall of Light
by Niall Williams

In Stock
$13.49
inc. GST
One family, five journeys - and a story that lives on long after the last page is turned.
Very Good
8 in stock

The Fall of Light Summary

The Fall of Light by Niall Williams

Francis Foley is a proud, stubborn man, and cannot stand to be beholden to anyone. Quick to anger and slow to forgiveness, it is his temper that, one day, costs his sons their home -- and their mother. This will not be the last of their losses however: as the four boys and their father embark on an odyssey to find untenanted land they can call their own, their already diminished family is divided still further. But if a combination of choice and chance cause the five to separate and scatter, each to their own road, then a series of casual encounters and coincidences offer some hope for reunion and -- in Francis's case -- redemption.

Set in Ireland in the mid-nineteenth century, The Fall of Light traces the footsteps of the five Foley men. With elegant, elegiac prose, Niall Williams guides his characters -- and his readers -- through hazard and hardship, friendship, love and death, through to Europe, America and Africa . . . and home again.

Niall Williams was born in 1958 and lives in Kiltumper, Ireland, with his wife Christine and their two children. He is the author of several novels, including Four Letters of Love, which was sold in over twenty countries and is an international bestseller.

GOR000508984
The Fall of Light by Niall Williams
Niall Williams
Used - Very Good
Paperback
Pan Macmillan
2002-04-27
400
0330487000
9780330487009
N/A
Book picture is for illustrative purposes only, actual binding, cover or edition may vary.
This is a used book - there is no escaping the fact it has been read by someone else and it will show signs of wear and previous use. Overall we expect it to be in very good condition, but if you are not entirely satisfied please get in touch with us.