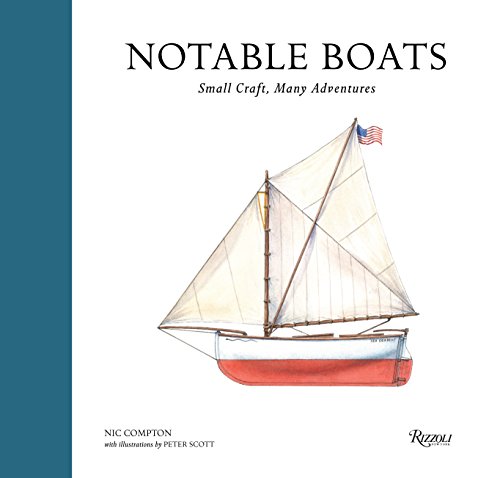 A charmingly illustrated selection of thirty-six iconic boats and the remarkable stories surrounding them.

Whether it be on a humble fishing boat, a canvas kayak, or a racing yacht, the allure of navigating across a brilliant blue sea is a pleasure that many dream of experiencing. Notable Boats presents thirty-six small crafts and the inspirational journeys that made them memorable, celebrating the beauty and craftsmanship of each vessel. From an eleven-foot micro-cruiser that was built on an apartment balcony then set sail around the world, to the seven-day voyage that would change John Lennon's life, this book is an absorbing read that will engage the reader in the romance of maritime adventures.

Featuring beautiful color illustrations, attractively styled statistics, and gripping text, Notable Boats is a delightful read for anyone who appreciates the art of sailing, showing a range of everyday crafts such as the canoe and the fishing trawler, boats of historic interest, fictional ships, and more. Each boat is illustrated in detail, including the aerial view of its deck, a map of its course, and a written description of the boat and what it is famous for. The stories cover the globe, with compelling tales from all the world's waterways, from the Nile to the poles and from the Spanish Main across the seven seas.

Notable Boats offers an intimate window into a world of sailing and pays homage to some of the world's most unforgettable boats, adventurous sailors, and amazing voyages.

"This is a very fine coffee table book for boaters' homes or salons that takes up little space (9 in x 8.5 in). There are 33 stories about sail boats and three stories about imaginary boats. Huckleberry Finns' raft and Robinson Crusoe's carved log are examples of imaginary boats. Each boat is described on four pages. Page 1 is a top view, page 2 is a beautifully detailed full page water color by Peter Scott, and the last 2 pages tell Nic Compton's story of the boat's adventures including maps showing the routes travelled. If there is a fault to this book it is the stories are too short. As you read one, you want to know more. Fortunately Nic has references in the stories which you can google to learn more. The introduction is interesting as it deals with why Nic didn't call these boats "classic" or "historic" but rather "notable". The Oxford English Reference Dictionary says that notable means "worthy of note; striking, remarkable, or eminent. Nic chose to write about boats and not ships. There are no stories about cruise ships, or celebrity yachts. Nic points out, "Most yacht owner have never made any journeys worth writing about." The smallest boat is "Said" an 11 ft 10 in engineless boat that sailed around the world from 1999 to 2003. The largest is the 143 ft Bluenose, a Grand Banks fishing and racing schooner built in 1921 that appears to this day in miniature on the 10 cent Canadian coin. The oldest boat is Casanova's 1757 Venice gondola with the newest an 18 ft 1978 Druscombe Lugger that sailed almost around the world."
--Bob Duthie, CEO/Founder, Duthie Learning - Bob & Mavis Duthie's Adventures: On The Water

"Rainy days are no excuse to cancel maritime adventures; a new book out this March, titled "Notable Boats: Small Craft, Many Adventures," provides a number of examples of engaging boat escapes. . . . Each story comes with illustrations of the boat, an aerial view of the deck and a map of the boat's historic course."
--Lakeland Boating Magazine

Nic Compton has spent half his life living on boats and the other half writing about them. He worked on the arts desk at the Independent newspaper before becoming editor of Classic Boat magazine. He has written fifteen books, mostly about boats and the sea, including a collection of sea stories.

GOR010796474
Notable Boats: Small Craft, Many Adventures by Nic Compton
Nic Compton
Used - Like New
Hardback
Rizzoli International Publications
2017-04-04
160
0847859673
9780847859672
N/A
Book picture is for illustrative purposes only, actual binding, cover or edition may vary.
The book has been read, but looks new. The book cover has no visible wear, and the dust jacket is included if applicable. No missing or damaged pages, no tears, possible very minimal creasing, no underlining or highlighting of text, and no writing in the margins.