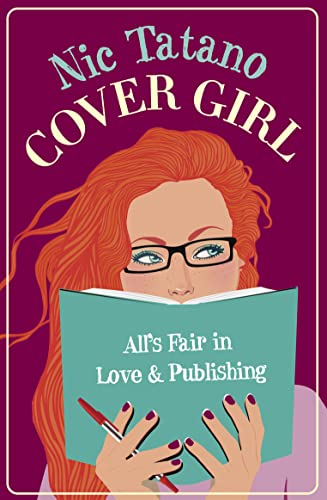 Powerhouse romance editor Keira Madison is known as "Cover Girl" - because she's come up with the concepts for the covers of the best selling novels in history. But right now, she's desperate to replace her best selling author.

Powerhouse romance editor Keira Madison is known as "Cover Girl" - because she's come up with the concepts for the covers of the best selling novels in history. But right now, she's desperate to replace her best selling author.

Wannabe author Alex Bauer has given up hope of ever selling his military thriller, so he takes a shot at writing a romance and sends it to super agent Bella Farentino. She's blown away by the book, but more shocked to find out the author is a man. So she decides it's best to keep it a secret when pitching the novel - what does a man know about romance after all?

When Keira buys the book, Alex needs a cover story to hide the fact he's the real author. So he invents a fictional cousin who's an agoraphobe; too shy to ever leave the house. He agrees to work as "her" intermediary during the editing process while getting a friend to "play" the author on the phone.

One major problem. He falls hard for Keira, a spunky redhead who is a dead ringer for the heroine in the book. And she's smitten with him, as he's a clone of the novel's romantic hero, a fictional Mister Right come to life.

You see where this is going.

As the release date for the book gets closer, their relationship grows stronger while the tale of the fictional author goes over the top. At some point Alex will have to come clean that he's the real author of the book but worries he'll risk losing Keira because she won't be able to trust him.

It's "Tootsie" meets the publishing world... without anyone getting dressed up in drag.

`I truly adored this novel, I think Nic Tatano has written such a fabulous rom-com, with some truly unforgettable characters, all who had fantastic relationships... One of my favourite books this year, for sure.' - Leah, Chick Lit Reviews

`The heroine is sassy, the dialogue is razor-sharp and the romance is sweet. Well worth a read.' - Chicklit Club

`Wing Girl is straight up chick-lit, perfect for filming and being made into a rom-com cinema hit... fast and funny' - Wondrous Reads

I've always been a writer of some sort, having spent my career working as a reporter, anchor or producer in television news. Fiction is a lot more fun, since you don't have to deal with those pesky things known as facts. I grew up in the New York City metropolitan area and now live on the Gulf Coast where I will never shovel snow again. I'm happily married to a math teacher and we share our wonderful home with our tortoiseshell tabby cat, Gypsy.

GOR009734837
Cover Girl by Nic Tatano
Nic Tatano
Used - Well Read
Paperback
HarperCollins Publishers
2015-12-03
300
0008162131
9780008162139
N/A
Book picture is for illustrative purposes only, actual binding, cover or edition may vary.
This is a used book - there is no escaping the fact it has been read by someone else and it will show signs of wear and previous use. Overall we expect it to be in very good condition, but if you are not entirely satisfied please get in touch with us.