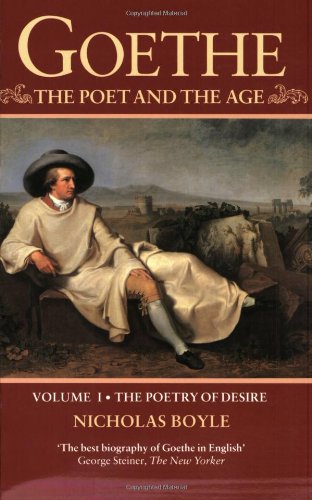 In Stock
$20.99
+10% GST
Covering the period from Goethe's birth up to 1790, this biography also examines the part Goethe played in German culture. It traces the personal and poetic meaning that he found in his youth in Frankfurt, his move to Weimar and his journey to Italy, and looks at the concept of "Goethezeit".
Very Good
Only 1 left

The author of Faust, the best-selling sentimental novel The Sorrows of Young Werther, of exquisite lyric poetry (set to music by Schubert and Mozart), and of a bewildering variety of other plays, novels, poems, and treatises, Johann Wolfgang von Goethe also excelled as an administrator in the cabinet of Carl August, Duke of Saxe-Weimar. Considered by Nietzsche to have been 'not just a good and great man, but an entire culture', Goethe was as vital a part of late eighteenth- and early nineteenth-century German social and political life, as he was its cultural nucleus. However, as this perceptive biography shows, the originality of his art lay in his complex distance from his times.

Nicholas Boyle is University Lecturer in German and Fellow of Magdalene College, Cambridge. A Goethe specialist, Boyle has written extensively on German and French literature and philosophy.

GOR001999389
Goethe: The Poet and the Age: v.1: Poetry of Desire, 1749-90 by Nicholas Boyle
Nicholas Boyle
Oxford Lives Series
Used - Very Good
Paperback
Oxford University Press
1992-07-09
828
0192829815
9780192829818
Winner of Royal Society of Literature Award 1991
Book picture is for illustrative purposes only, actual binding, cover or edition may vary.
This is a used book - there is no escaping the fact it has been read by someone else and it will show signs of wear and previous use. Overall we expect it to be in very good condition, but if you are not entirely satisfied please get in touch with us.