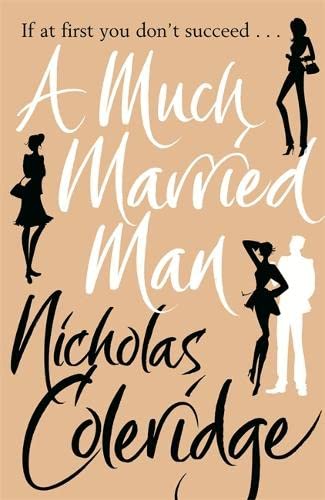 A Much Married Man
by Nicholas Coleridge

A Much Married Man Summary

A Much Married Man by Nicholas Coleridge

A stunning new blockbuster from the author of GODCHILDREN.

An Englishman's home is his castle. Or at least it should be. But as Anthony Anscombe surveys Winchford Priory, his beautiful Elizabethan house in Oxfordshire, lurking in the village are more than one or two reminders of a life well-lived.

His first wife was the hauntingly beautiful girl he married in an impulsive rush of hedonism. Amanda was never going to live up to her role as the wife of a country squire, so why does she still cast such a long shadow in Anthony's life?

Sandra, the second wife, came to Anthony's rescue. Sturdy, dependable and relentlessly practical, Sandra had plans to turn the Priory into a proper family home, until that summer when it all went horribly wrong...

And then there's Dita, a force of nature. Effortlessly glamorous and achingly wealthy, Dita storms through Anthony's life, organising and rearranging - particularly when it comes to previous Mrs Anscombes and their children.

With the entire cast of his life roosting in the village, it's no wonder Anthony doesn't have a minute's peace.

Customer Reviews - A Much Married Man

A Much Married Man Reviews

This is Jilly Cooper territory, only with classier interiors and better-groomed dogs -- Emma Hagestadt * INDEPENDENT 16.02.07 *
Perfect fodder for comedy, and proof that large cast plus complex plot equals hilarious results * THE HERALD *
Fun society novel * IN THE KNOW *
A delicious page-turner that will keep you hooked * THE SUN *

Nicholas Coleridge is managing director of Conde Nast in Britain, the magazine publishing house that includes Vogue, Tatler, House & Garden and Vanity Fair. He is the author of four previous novels and lives in London. He is married with four children.

GOR000701260
A Much Married Man by Nicholas Coleridge
Nicholas Coleridge
Used - Very Good
Paperback
Orion Publishing Co
2007-02-08
576
0752879634
9780752879635
N/A
Book picture is for illustrative purposes only, actual binding, cover or edition may vary.
This is a used book - there is no escaping the fact it has been read by someone else and it will show signs of wear and previous use. Overall we expect it to be in very good condition, but if you are not entirely satisfied please get in touch with us.