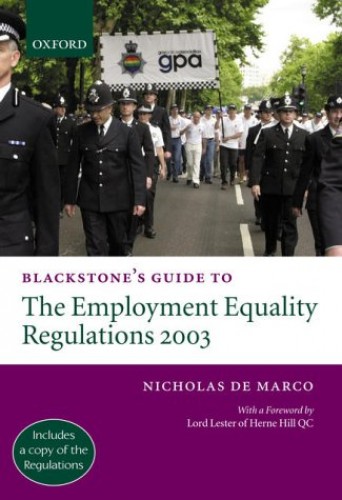 Out of Stock
$26.49
inc. GST
The Employment Equality (Religion or Belief) and (Sexual Orientation) Regulations 2003 came into force in December 2003 and make it unlawful for employers to discriminate on the grounds of religion or belief and sexual orientation. This book provides a full commentary on the new Regulations, with practical advice.
Very Good
Only 0 left

... a timely and useful commentary. ELA Briefing Clearly laid out user-friendly chapters take the reader through the complex regulations ... The guide will be of use to newcomers to the Regulations, to those concerned to ensure their workplace complies with them, and to those who may wish to rely on them. It should also be of interest to specialist lawyers and representatives interested in examining situations in which religion or belief discrimination can arise. Adviser

Nicholas De Marco is a barrister practising from Blackstone Chambers in London. He has expertise in employment and discrimination law, and his practice spans across employment, commercial public, and human rights law. He previously worked as a judicial assistant to Lord Woolf, the Lord Chief Justice. He has written for various publications and is the author of the chapter on discrimination in the new edition of Lester & Pannick's "Human Rights, Law and Practice," and the General Editor of Administrative Courts Digest.

GOR003309526
Blackstone's Guide to the Employment Equality Regulations: 2003 by Nicholas de Marco
Nicholas de Marco
Blackstone's Guides
Used - Very Good
Paperback
Oxford University Press
2004-02-26
296
0199272654
9780199272655
N/A
Book picture is for illustrative purposes only, actual binding, cover or edition may vary.
This is a used book - there is no escaping the fact it has been read by someone else and it will show signs of wear and previous use. Overall we expect it to be in very good condition, but if you are not entirely satisfied please get in touch with us.